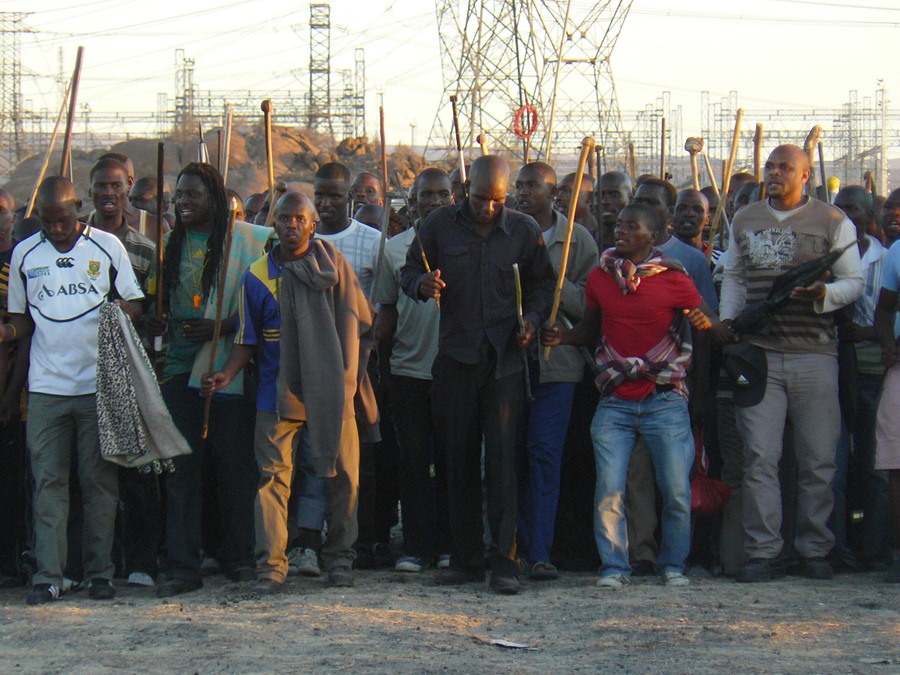 The fanfare at the beginning of a New Year is usually celebratory and full of hope. This celebration is a way for people to wipe the slate clean and begin anew. But last year, 2013, was a particularly tumultuous year in South Africa when we were besieged by problems. In reality, these problems have been with us for many years and cannot be swept under the carpet. Many of the challenges South Africa faces are systemic and must be addressed with greater urgency. Let us include the resolution of our problems in the New Year and make a concerted effort to intensify and accelerate the fight for social justice in 2014.

The widows of the slain mineworkers of Marikana are still involved in the drawn out legal deliberations of the Farlam Commission. They have yet to see justice or receive compensation for their loss and suffering.  Many have absolutely no income and are unable to feed and clothe their children. It is unacceptable that neither mining company Lonmin nor government have provided adequate compensation to the widows of the slain miners.

Let 2014 be the year in which we demand swifter justice for the Marikana widows. Let us collectively demand that the killing of the slain miners is met with justice and that their widows are financially compensated for their loss as an emergency.

Cheap labour is an attractive resource for foreign investors, but the exploitation of workers is the underlying cause of social malaise and on-going uprisings. Marikana is a case in point. This can never be allowed to happen again and must never be forgotten. Both local and foreign corporates must be compelled to pay decent wages and treat their workforces with the humanity they deserve.

Let us demand corporate accountability – beginning with the mandate that foreign investors and local corporates must treat the labour force fairly.  Let us demand that our government sets a decent national minimum wage that allows people to live with dignity.

Women’s needs must be prioritized in 2014.  We must collectively work to empower marginalised women in South Africa in ways that are practical and tangible. We must demand that change occurs for women through various state interventions that enable marginalized women to begin to deal with and protect themselves from the violence perpetrated against them. Perpetrators of violence need to be dealt with in a way that supports women and human rights. Marginalised women need concrete support – not earnest commodified concern from privileged women.

Let us say no more hellishly expensive feel-good middle class anti-rape campaigns. Let us demand housing, sanitation, better grants, access to land, and access to legal support and services for women. These will go a long way towards ensuring that women can live a life of dignity in South Africa.

Minister of health, Aaron Motsoaledi has been doing a good job in the health sector and has made a passionate plea for affordable healthcare as well as the cessation of uncontrolled private healthcare costs as this negatively impacts overall healthcare in South Africa.  The private health sector must offer healthcare that is socially responsible and embrace the NHI ethos of providing affordable and equal health care to all our citizens, whether well off or unemployed.

In support of Minister Motsoaledi’s vision let us demand that the government fast tracks the implementation of the National Health Insurance (NHI) and compels the private health sector to participate in this NHI initiative instead of resisting this call in favour of profits.  Let us join the call on government to fix our broken hospitals, improve the training of nurses in the public sector and recognise their contribution through better wages and more placements.  Good healthcare is a right, not a luxury.

It is not acceptable that the poorest of the poor are dumped in cheap housing projects far from work opportunities or public services. This contributes to social and health problems, including depression. Poor black people are made to feel like human waste. The issue of decent housing for the poor as well as the legacy of apartheid planning have not been addressed. It must be addressed urgently so that all can access a life of opportunity and have their humanity acknowledged.

Let us demand that the department of Human Settlements begins to build houses for the poor in in well-located urban areas in close proximity to places of opportunity.

Education is a universally accepted instrument for economic and human growth and is a fundamental human right, yet it continues to be a problem in South Africa. The recent Limpopo textbook scandal is symptomatic of a wider problem. Our newspapers are awash with stories of schools in poor communities that lack desks, chairs and toilets. We routinely read about lazy and/or poorly qualified teachers. Meanwhile, our government’s policy on what constitutes a pass – a mere 30%, means that we are developing a nation of know-nothings.

Let us demand greater government accountability for a better education for all South Africans.

Food security must be high on our list of concerns for 2014. Many of the poor in South Africa suffer from malnutrition and are a step away from starvation. Poor South Africans do not have access to fresh and nourishing food. Research shows that poor people, both in urban and rural areas, buy their food instead of growing it. Meanwhile grants and low wages are not keeping abreast with rising food costs; with the result that many people live on low-grade diets devoid of the nutrients that contribute to good health. This also means that obesity and its related diseases are rife in poor communities.

The Mandela memorial’s so-called fake signing man debacle shone the spotlight on the lack of care taken to make sure that the needs of disabled people are met in all public spheres. Ableism is prevalent in our society and this results in the additional marginalisation of disabled people. Further, disabled people living in marginalised communities lack basic infrastructure and services, which results in multiple oppressions for disabled individuals living in informal settlements and townships. This is a transgression of their human rights.

Let us demand that people living with disabilities be integrated into society and given the same opportunities as those not affected by disability.

Racism continues to plague our society and must be contained and treated as a serious offence. Findings reveal that black children feel a sense of worthlessness and negativity about their blackness as a result of consistent negative messaging in relation to black people in the press. They report feeling that black people are accused of corruption and poor leadership and criminal behaviour much more than other race groups by our press. This can only mean that white children also feel a sense of superiority. This skewed phenomenon is creating a society that is still racially divided.

Let us demand that the use of the media to propagate anti-black messaging be examined and transformed as part of a concerted anti-racism process.  Let us demand that our government and the Human Rights Commission deal with racist slurs and behaviour swiftly and with real intent so that the narrative begins to change to one of equity and dignity for all.

How much more pressure from above can the poor of this country endure?  Let 2014 be the year where we understand that the struggles of the poor are everyone’s struggles. Many do not realise this yet, but the so-called new middle class is being set up to become the new poor (indebted) whilst the poor become the wretched of the earth.

Let us not turn a blind eye to these transgressions of human rights and dignity and claim our right to protest for a better life for all. Let 2014 become the year in which we collectively access our compassion and activism and recognize that the suffering of the poor is in direct contravention of human rights. Let us all then, become activists for change and demand a life of dignity for all.

Schutte is an award winning independent filmmaker, writer and social justice activist. She is a founding member of Media for Justice and co-producer at Handheld Films.

This article first appeared on SACSIS