HomeDiversityWe need to talk about racism. 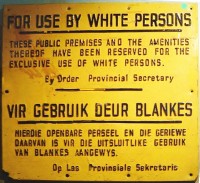 So here I am, on the Tedx stage, to deliver probably the message that makes me the most hated person in South Africa as far as white many people are concerned.  Certainly I have been called all sorts of horrible things including self loathing, masochistic, a black wannabe, a bitch witch dyke man hating, mad women who should be burnt or shot or drowned. So you can imagine my trepidation at standing up here and delivering the message that I have prepared.

I receive these insults … and even a few death threats  … because I believe that we need to talk about racism.

At least that is what I was taught by my little boy over the years… and I am a real believer in Toddler Teachings because toddlers see the truth with few barriers and no bias.

When my son was three years old he asked me why he is not white like me or browned like his dad.  I was put in a spot where I had to teach him about the birds and the bees and the race construct all in one short bite.  I began haltingly – Kai mommy and daddy both made you and … to which he stood up, his little chest puffed and shouted – “ja and you painted me golden hey?”

The fact that my child was bright, observant and wanted to unravel the mystery of his beautiful hue and three-tone family was not an indictment on us. It was sheer curiosity. But it was also what he saw on our streets daily that made him decide what he wanted to identify himself as … and that was golden.

Later on in his life we drove past some street kids. He said: “Shame mommy, black children don’t have mommies and daddies hey?” I then had to deal with socio-economic issues – and was bit stunted in my reply. How would I explain to a four-year-old the workings of a racially divided society, which left many children homeless, and that in our society most of those children were black?

My child sat in the back seat of our car and witnessed a world that was still racially divided, that still undervalued the wellbeing of the majority in our country. As far as he could tell, white people had a better time of it.

It was what our society reflected back to him that made him sometimes go even further and insist that he was not black. He even once said to me when we were watching the news, “mommy black men are tsotsis hey” And each time I would have to go through the people in his life. What colour is Daddy? — Daddy is black — What colour is Granddad –  Granddad is Black – Well, are they tsotis? — No — So you see Kai not all black men are tsotsis – OK.

It was then that I realised that I would have to step into a different reality and help my child navigate the racialised disparities that were rife in our democracy.  I had to find a vocabulary to explain the many incidents of racism that erupted on our social landscape but which our society mostly chose not to engage in.

Years later racism remains a conversation we just do not want to have and I feel very strongly that this is one of the reasons why we remain a largely untransformed country 20 years into our democracy.

Racism does not just go away because we will not deal with it or because we say it is not there.

Racism is like a terminal virus and it will continuously erupt if not treated at the source.

I am going to make the proposition that the way to finally rid our society of this viral disease is for every white person in it to come to terms with their personal racism.

I had to do it in relation to my own son in my quest to understand the world he will be traversing as non-white. As a result I became an anti-racism activist and through my own process I have grown to believe that UNTIL we reflect on and challenge this personal racism, we will never see genuine transformation in South Africa.

We need to talk about racism.

Many of us prefer to see the blight of racism in other people – usually those who are right wing – but I have come to recognize that as white people growing up in a globalized system that automatically favours us and has entrenched structural racism, it is highly unlikely that any of us have escaped this indoctrination. In truth we had negative beliefs about blackness ingrained in us from the moment we passed into the realm of language.

If not, by our families, then most certainly by the system.

This is the hardest thing to admit to as a white person– so hard in fact, that many prefer not to do the work and instead insist that we live in a non-racist society and world.

But we don’t. And this is how I know why.

My son is now 14-year-olds and has a taste for hoodies, rap and hip hop clothing. He carries a smartphone in his pocket which he reaches for often to text one of his friends. He has a friendly face and temperament but has also learnt at a young age to stand up for his own rights and speak out against the injustices of the world. Someone once suggested to me that his face is so sweet no one would do him any harm. But Trayvon Martin had a sweet face too.

The horrible truth is that no matter how sweet his face is, he may also one day be perceived as a threat to some trigger-happy racist with a gun because he reached into his pocket for his smartphone at the wrong moment – or simply because he is not white. Like Trayvon Martin he would never take abuse lying down. He would stand up to a man pointing a gun at him for no apparent reason.

I can tell by how angry and vocal he became when he heard the story about his father being surrounded by neighbourhood watch men, armed to the hilt with guns cocked when he went to draw money at an ATM in the Walkerville Spar last year. He went to the same ATM twice because he had not drawn enough cash the first time for his cash purchase. The second time somebody alerted the neighbourhood watch. They came like a small army of white men in bakkies and ambushed him as he walked out the shopping centre.

He had to control his anger because he also knew that in this country an angry black man could get killed in cold blood in front of a bank merely for being black. It did not matter that he was well dressed and drove an expensive car – his blackness was enough reason to profile him as a potential criminal.

I am the white mother of a biracial male child who has been born into a world in which to be black and male makes you vulnerable to random shootings in suburban settings, where it seems, any black male is a potential threat.

After this incident I had no choice but to reflect on my own childhood and come to terms with the fact that I too was taught that fear wore a black man’s face. I also realized then that I would have to go even further in my exploration of racism in order to explain to my son this false construct that my white world was built upon.

White Privilege has become invisible to white people but it is certainly not invisible to black people who have to interface with this entitlement on a day-to-day basis. Many white folk have created a new narrative for themselves that casts them as the victims of reverse racism and economic sabotage.

I don’t buy into reverse racism when what we are still dealing with is a 340 year legacy of white oppression and brutality towards the black population which resulted in systemic inequality, horrific poverty, widespread homelessness landlessness and broken families.  What happened to blackness in 340 years was destructive on the scale of multiple holocausts – the very fabric of black society was decimated and the black population was forced to become cheap labour to serve the white population.

This is the truth of it and this systemic damage still exists in our current society –  despite the growing black middle class. It was inherited by the democratic South Africa and it has become further entrenched through corporate biased governance.

If we really lived in an anti-white society then why 20 years into our democracy are 91% of CEO positions still held by white men?

Why is 48% of our population living below the breadline and why are those people black?

Why is it that we live in a society where 3 million black households are without sanitation whilst the rest of us enjoy hot running water and toilets inside our homes?

But the big question is– why are we ok with this?  Why are we not up in arms and taking to the streets with the poor and demanding equality and dignity for all of us?

I will put it to you that it is because these disparities have become normalized to white people over the centuries and somehow we are taught to justify them and even ignore them.

The horrible truth is that white people are programed from the beginning to feel zero empathy towards black people.

How do we get over that?

Well we need to talk about racism.  We need to explore it and turn it inside out and upside down and then we need to deal with it.

This is where the really hard work begins and it requires deep personal reflection.   It also requires the deconstruction of the negative beliefs we were taught about blackness … as well as an acknowledgement of the pain we have caused black people as a result of these beliefs.

I know this is not an easy pill to swallow– but we are all culpable and capable of being the oppressor.  It is what we were taught to be.

I also know that many of us sitting in this room find the current racialised status quo unacceptable and will take up this challenge to ACKNOWLEDGE PERSONAL RACISM, deal with it AND become lifelong activists and agents for change.

It takes a big dose of courage and tenacity.  You may even have to get used to hate mail ….

By transforming yourself you help to transform the world into one that can leave a legacy of love, diversity and equality to the next generations.

That is the future I envision for my son.

AND Let’s keep talking about racism until we have spoken that fallacious monster into oblivion –because oblivion is where racism belongs.