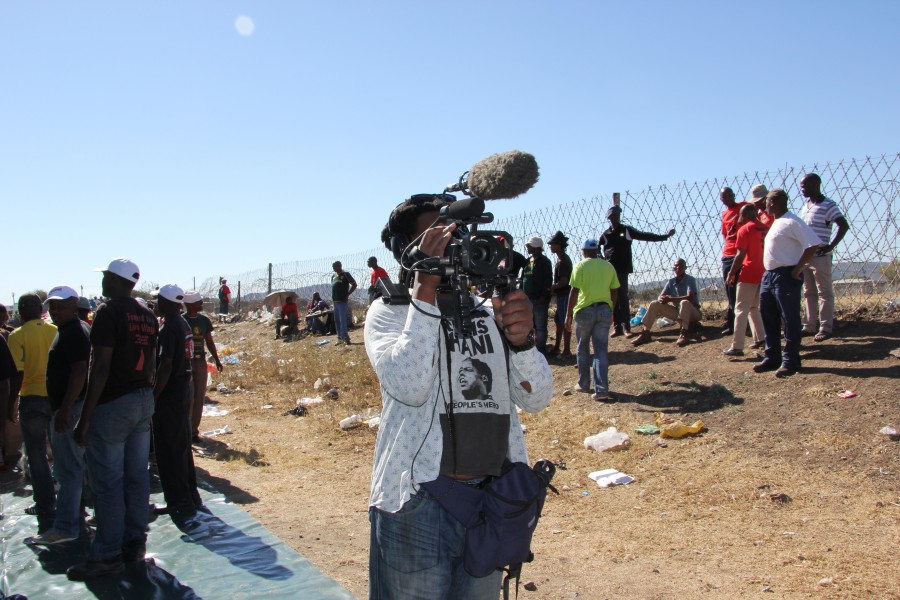 CLICK ON THE YOU TUBE ICON TO WATCH THE FILM IN FULL SCREEN.

Sipho Singiswa spent over two years in and out of Marikana reporting on the strike and following the stories of communities who were directly affected by the Marikana massacre in 2012.  He gathers the stories, heartaches, voices and songs of the people living around Lonmin in his passion to share the humanity of his people with the world.  In a neoliberal South Africa, the working class are misrepresented in the media and largely stripped of their humanity.  Indeed, the miners were represented as dangerous and out of control before the massacre – and this played into the public response to the massacre – which was largely lackluster.  Many people interviewed believed that the miners got what was coming to them.

Singiswa, who spent 2 years of his youth in solitary confinement in 1976 and a further 5 years on Robben Island becoming an MK operative on his release,  is deeply touched and angry about the massacre in a South African democracy that he once helped to fight for.  He has long since been disillusioned with the economic policies in a country that favours the rich and is actively anti-poor.  He is deeply wounded that his people have continued to be oppressed and brutalised by the people he once looked up to.

This film tracks his personal struggle to deal with the brutality of the massacre, and as he analyses the corporatised government and the politics of an unequal South Africa.

His narrative also unpacks the media bias in representations of the striking miners, the relationship between unions, state, police and corporates and how this collusion culminated in the most lethal force being used against men who were simply rising up for a life of dignity.

The camera follows the lives of people in Marikana over two years, as people struggle to come to terms with the killing of fathers, sons, brothers and uncles.  It tells the story of their struggle for socioeconomic justice in a place where services are scant though they live in the shadow of a multibillion mining company – British owned Lonmin.

It looks at the day-to-day struggles of women living without sanitation and without job prospects.  It also tracks the story of widows waiting for justice for the loss of their husbands and bread winners.

Mostly the story is a sensitive offering of the humanity of the people on the Platinum belt – people who feel they have been made to look like devils on the media- devoid of spirituality, psychology and humanity .  It is also a seering expose of the heinous living conditions that miners and their families are forced to endure in areas where environmental transgressions are commonplace with mines spilling and dumping toxic waste into water earth and air.

All of this is an assault on the people who live around mines and the song Senzeni Na?  is often heard in protests and strikes – when people rise up to claim their rightful space as human.

Become a co-producer on this project by donating anything between R100 and R10 000 towards this film:

This is a film that exposes the dire conditions that the poor of South Africa are forced  to endure  – a film that will go out onto an international platform and holds foreign investors in our country accountable.  Supporting this film will go a long way to demanding equality in South Africa and help towards people achieving their rights to live with dignity.

Become part of this action and help Sipho Singiswa finish this film.  His work over the two years has been unfunded – out of his own pocket and driven by his love for the people of South Africa and his dedication to equality and justice.

He requires a budget for archives, to do studio interviews, edit over 200 hours of footage, research and scripting fees, staff to translate and subtitle footage, more production costs for further filming in high end High Definition and a crew to frame this social media film in a high end cinema look as well as post production and distribution costs.  Our aim is to raise at least R500 000.00 through crowd sourcing.

We thank you for your support.

To make a donation to this activist film please use this account:

Reference:  Marikana plus your full name.