HomeArticlesThe student risings through the lens of a veteran 1976 student leader. 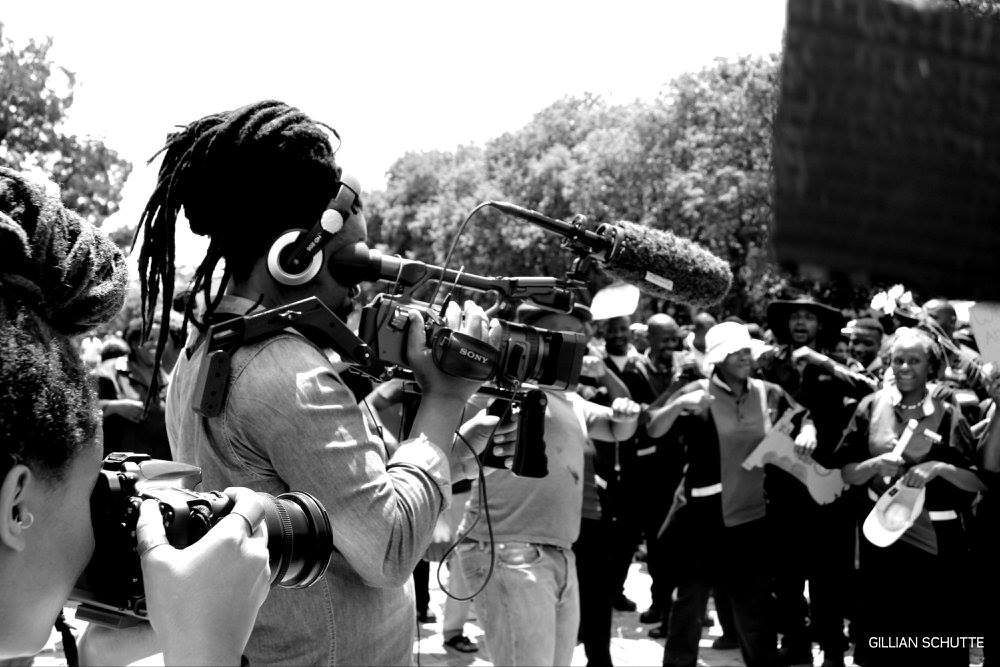 By: Media for Justice

Sipho Singiswa has been recording the Student Uprising since its inception when he camped out with students in the occupied Azania House, UCT in March of 2015.  Since then he has spent time recording the struggle at various universities around South Africa.  Each time he has, in true verite style, filmed the protests by keeping the camera rolling the entire day. This is a fly-on-the-wall film style that allows the truth to unfold right before the camera with few pauses, ensuring that the struggle is contextualised. It is a method that goes way beyond the soundbite. Cinema Verite means the cinema of truth and as an activist filmmaker it is the truth that Singiswa is after.

The student risings are close to his heart. He feels that the youth are continuing the unfinished business of his generation, who in 1976, rose up in resistance against the oppressive regime of apartheid. Thousands of children were brutalised by the apartheid police in unimaginable ways and many disappeared into the prison system for years.

Singiswa was a student leader in the Gugulethu 76 uprisings and was arrested when he had just turned 16. Before being sentenced to Robben Island for five years Singiswa spent two years in and out of solitary confinement.  He describes the brutal physical and psychological abuse that he and his peers were subjected to when interrogated. What he narrates can can only be understood as torture and child abuse. Made to stay awake for days on end and stand on a single brick for hours, Singiswa was questioned over and over about who the youth’s handlers were and whose agenda they were fulfilling. Of course, as in this contemporary uprising, the answer was always the same. There are no handlers. There is no ulterior foreign funded agenda. As it was then uprisings are about the youth and the untenable problems they face in a country that offers neither them nor their parents social safety nets. Student protests are democracy in motion. It is their right to demand what was promised to them by the ANC back in the 90’s – before GEAR was ushered in and the FREEDOM CHARTER pushed aside to favour neoliberal economic policies. Because of his political background and his ongoing activism against the injustices meted out by what he describes as “a corrupt state which is reduced to managing white monopoly capital and protecting white interests and their own shares,” Singiswa feels immense solidarity and resonance with the students involved in the uprising. He refers to them as ‘my people’ and is sensitive and committed in his portrayal of the students who continue to struggle against a system that aims to rob them of their right to a free education and a positive future.

“They are simply demanding what was promised to them by the ANC led government back in 94. The Freedom Charter had already made some compromises in terms of protecting white interests, but it is the sunset clauses that really sold us down the line.  Implementing GEAR instead of the Reconstruction and Development Plan ensured that the Gini Coefficient would be the highest in the world.  Everything has worked out well for white business but has been a disaster for the black and poor.  63% of the entire population is now living in desperate poverty.  Of course this means that the majority of black people live in desperate poverty. Neoliberal policies have ensured that instead of equality we have been dished up a life in which everything is commodified and unaffordable. This includes education.  Many students come from families that are trapped in poverty. In this neoliberal state even food and water is inaccessible to people who earn nothing or who earn a pittance. The market place is about rampant profiteering and this places profits before people. Unless you belong to the top 10% or the upper middle class, life is a struggle that is often unbearable.” Singiswa has also worked tirelessly recording many community struggles against Multinationals to be used as advocacy, and lobbies for the rights of ex-policial prisoners who have all but been forgotten by the State.  “Many of my co ex-political prisoners who did not jump on the gravy train are dying at my age – not even 60. They are dying of disappointment, depression and despair. They are dying of hunger and poverty related illnesses. Not a month goes by where I am not going to funerals of people who were part of the resistance movement in the 70’s and 80’s. It is so sad that they died while feeling that the liberation struggle they fought for came to nothing but more privilege for whites, an elite black class and more poverty and pain for the majority of black people in South Africa.”

Singiswa says that one cannot extricate these struggles from the student uprisings. “These students are our children and our generation has let them down. Now we watch them putting their bodies on the line to fight our battles while many of my contemporaries distance themselves from them, only because they are now sitting comfortably with their shares and cushy jobs. They have lost touch with the issues that they were born into. They simply do not care enough about the oppressed and have become the oppressors.  I’m not only talking about government. I’m talking about people who were fed by the struggle and still claim to be progressive but are living elite lifestyles.  It is also horrific and sad to see the black elders turn on these black children with stun grenades and guns, when they themselves are in the same cycle of black suffering that the students give voice to. It is always black people who are protesting in South African and whose bodies are on the frontlines – so it is us who are brutalised by the police – even mowed down in cold blood as happened in Marikana and to Andries Tatane. I fully understand the students when they talk about black pain – and express that they cannot breathe. I carry that pain in me too. It is the wound inflicted on my people through the suffering of our history and white imperialism. It is the wound of having given up my youth to fight for a liberation I believed in but which never came to pass. All around me my brothers, my sisters, my mothers, are still the wretched … or they are pressed beneath glass ceilings trying to breathe under the heavy weight of whiteness and being undercut at every turn.

I did not give up my youth for this ongoing neocolonial reality. For me the struggle continues.”

These sentiments play out in Singiswa’s filming as he meticulously records the student protests from beginning to end. He captures the nuances, the micro and macro conflicts, the struggle songs, the emotion and the passion of the students in real-time. He also records the truth of who the aggressor’s are in the field.

“It is the police or the security guards who are the aggressors and violate the student’s right to protest peacefully and not the other way round. In fact I cannot say I have once witnessed the students attacking the security or the police for no reason. I film these moving scenes and then I watch the NEWS and I ask if we were witnessing the same protest. In the mainstream media we hear the word violent used all the time in relation to the students but really, what is happening is that the students, who are organised and defiant, are not violent. They caucus and organise and debate with great depth and intellect. They march with discipline and they demand through numbers and protest action to be let into spaces that are rightfully theirs to enter. When the management colludes with the police force and private security companies, who hire in mercenaries from African wars, to keep students out then the students naturally amass outside the building and use their collective body to push up against the security. They are already up against a system that seeks to squeeze them from the top down and sometimes when this is too much and anger erupts, stones get thrown and buildings burn. But this is in response to state violence. It is not the first call – it is the last resort.”

Mainstream media, however, consistently reports on students in a manner that makes them the baddies, the perpetrators of violence and out of control. They mostly fail to mention that the police are contravening the student’s rights that are enshrined in the constitution.  They fail to point out that the students are most often not violent, are organised and are simply protesting robustly but peacefully. This is what happened in the reportage of Marikana – most conservative or racist people get the impression that singing struggles songs and doing struggle dance is violent behavior. It is not.

“But with a consistent aggressive response from University Management who employ militia bolstered by the police force, students are forced into retaliatory mode.  It is only when they are provoked that the stones come out and the ‘violence’ begins. But this is the very violence that the draconian system encourages. They use the obvious response to justify their heavy handed use of military and police to come down on democratic movements that threaten the profit racketeering of the upper echelons.   These heavy handed militarised responses to protests throughout South Africa are all about protecting profits and shares – nothing more. It is clear that this hoodwinking cannot continue and the students are the forerunners in what can only result in radical change in our land.”

(Singiswa is making a feature film that tells the story of the 1976 uprisings from his personal narrative and links this to the student uprisings of 2016. It is due to be released in early 2017.)