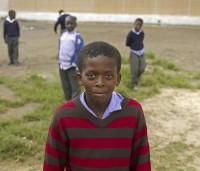 I must congratulate the class of 2013 for achieving what is said to be the highest pass rate of 78.2% since 1994 in South Africa.

It is always exciting to watch newly matriculated youths get into the real world, some get jobs, others further their studies while others journey to find themselves wherever life takes them, all very interesting growth paths young people must go through. I’m confident that I speak on behalf of every South African by saying the 78.2% that the class of 2013 reached has made all of us really proud, I won’t be talking about the authenticity of those results, that’s a story for another day.

But the hard truth is that we cannot congratulate the class of 2013 without reflecting on the many shortcomings of the ministry of education or the severe impact this has on black children — children who only have some sort of an education as the only tool to set them free — free from present-day racism, poverty and the burden of their predecessors which lingers on for many to this day. The department of basic education lead by Angie Motshekga won’t stop talking about this year’s results. I’m not surprised given that not so long ago they failed to provide schools in Limpopo with textbooks for almost six months! To make things worse, the Eastern Cape department of education was almost non-functional at some point, horrific given that the leading party claims to have prioritised education in the country. Clearly from this we see that this isn’t entirely true.

What the department of education must concern itself with instead is the post grade 12 lives of these young people finishing school every year. For many black school leavers life after grade 12 is not as rosy as the 78.2% pass rate that’s being forced down our throats in the media. Many black children will not make it to university or any further learning institution. Many black township-educated children, with or without the talent and ability, will never compare to an average white kid who went to a private school somewhere in a white suburb of South Africa. The dualistic nature of our economy is far reaching. The evil collective system of apartheid coupled by present-day racism still ensures that black children do not get the same opportunities a white child would. Even in a democratic South Africa 20 years into freedom.

We must also make the honest distinction between a public school, which is predominantly black, and a private school, which is largely white. The difference is really who can afford to go where, and most black people rely on public schools for obvious reasons — public schools with a compromised, substandard curriculum, with little if any decent extra-curricular activities such as good sports facilities, debate teams etc. All extremely important for grooming a child. I must mention, some black people will send their children to private schools, but these are mostly exceptions and don’t really make a significant difference anywhere.

The greater majority of black people only dream of sending their children to private schools.

You must understand that I am no cynic, I went to a black (public) school in a township and can proudly say I’ve witnessed very talented kids produced from that system. The problem and my contestation, is solely around the fact that these are only exceptional cases. Again these do not make the sort of impact that is needed to change the fate of an ordinary South African. Only smart kids make it out of the grossly oppressive system created by a white-dominated country that seems to aim to keep a black man in a township and send his kids to public, under-par schools — whereas white kids from a private school have a better chance at making it. It surely isn’t true that every white kid is smart and ready to take on the world. While some white people are affected by unemployment it is mostly blacks who suffer this fate. Walk the streets of Johannesburg or anywhere else in South Africa and count the number of black people sleeping in the streets, begging for money at the traffic lights and women carrying babies with empty stomachs. Perhaps some of them even have a grade 12 certificate.

Private, white-run schools still produce better results and this is not particularly due to the fact that white people are smarter. White kids from white suburbs, who are beneficiaries of apartheid are still better off than black children, regardless of what these black children have to offer the country and the world. It is these rather depressing facts that have led me to question the authenticity of a black matric certificate in a South Africa riddled by a competency challenged, classicist, elitist, racist South Africa.

(This is a column for open opinion and does not necessarily reflect the views of Media for Justice.)