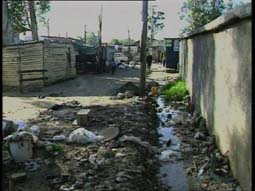 A film that investigates the case of the Grootboom community living around the sports field awaiting their promised housing.A gritty look at the squalor and poverty in an area in which 20 000 people crowd into a 2km radius with a broken down ablution block and very little service delivery.

Produced and Directed by Gillian Schutte

Irene Grootboom initially lived in Wallacedene, an informal squatter settlement in the municipal area of Oostenberg. The residents of Wallacedene live in severe poverty, without any basic services such as water, sewage or refuse removal. It is partly waterlogged and lies dangerously close to a main thoroughfare. Many Wallacedene residents had long since placed their names on a waiting list for low-income housing. As time wore on, a group of about 900 people, including Irene Grootboom, began to move from Wallacedene onto adjacent, vacant, privately-owned land that had been ear-marked for low-cost housing. The private landowner obtained an eviction order and the sheriff was ordered to dismantle and remove any structures remaining on the land.

• Section 26 of the Constitution provides that everyone has a right of access to adequate housing. It obliges the state to take reasonable measures, within its available resources, to make sure that this right is realised progressively.

• Section 28(1)(c) says that children have a right to shelter. The Cape High Court rejected the first argument. It said that government’s housing programme was reasonable and thus fulfilled the requirements of the Constitution. In terms of the second argument, the court said that parents are primarily responsible to provide shelter for their children. If, however, they are unable to do this, section 28(1)(c) places an obligation on the state to do so.

Further, the court found that the parents should be able to live with their children in the shelter as it was not in the best interests of children to be separated from their families. Government took the decision of the High Court on appeal to the Constitutional Court. The Constitutional Court affirmed that national government bears the overall responsibility for ensuring that the state complies with its section 26 obligations. It further found that:

• the current housing programme fell short of the state obligation to provide relief to people in desperate need. It said that a reasonable part of the national housing budget should be devoted to providing such relief. If this was not done, the state’s housing programme could not be considered reasonable for the purposes of section 26(2).

• the state’s direct obligation would apply primarily when children were removed from their families, orphaned or abandoned.