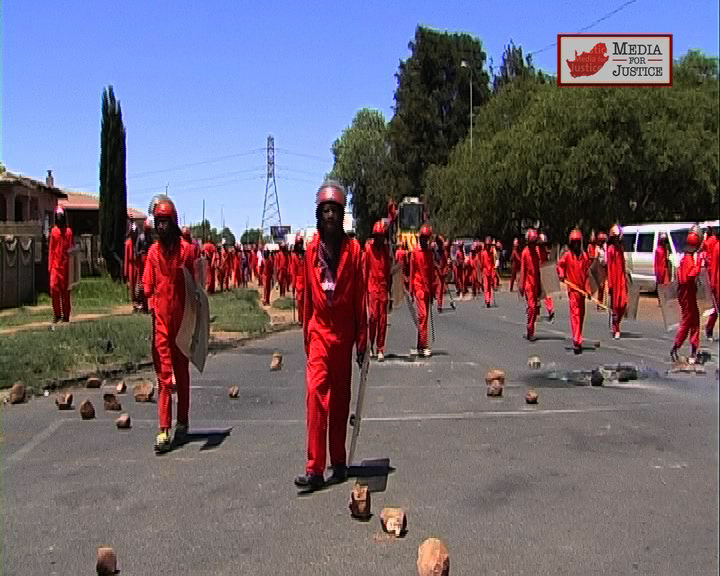 ‘The country is burning’.  ‘ Burning frustration.’  ‘Hot Headed protestors burn houses’. These are the headlines that abound about the many protests that are currently erupting around South Africa.  On television we witness mobs of black people apparently running amok, building barricades and burning tyres.  We hear of the disenfranchised masses dancing, picking up rocks and attacking the police.  We see men and women toyi toying angrily in front of the camera and singing struggle songs.  We witness wild looking mobs running down the streets and see scared cameramen and journalists scatter and find refuge behind the police.  We hear a vox pops or two from the people who are demonstrating.  They breathily tell us that they have no water or are unable to pay the exorbitant price of prepaid electricity.  A woman will tell us that she has to pay R7 for water each time she wants to cook or wash. But none of these explanations register as calamitous or problematic to the average viewer.  They give their kids more that that to take to school everyday.  The may even pay that out to car watchmen and beggars weekly.  How can people burn houses because they pay R7 for water?  Why are they so violent – they ask? We hear the words ‘violent’ protest – a protest turned ‘violent’ today – the ‘angry’ mob threw rocks at and ‘attacked’ the police – and so it goes on.

On the same bulletin we hear about the latest ‘real’ crime statistics.  Most crime happens after dark and first thing in the morning we are told.  Crime is way worse than the police let on and we are all under siege.  Crime is out of control the experts will say.  We are a nation besieged by criminal elements we hear over and over.

And thus the fate of the poor is sealed in the middle class mind.  The message is etched deep into the fearful collective consciousness of those who are materially well off and secure.  These mobs are a threat, they say.  They are out of control and after our wealth.  We fear them.  We vilify them.  We want them controlled.   They are not even human.

The media invites a host of well-spoken academics to pontificate about the social conditions that ‘may have’ ‘perhaps’ and ‘possibly’ given rise to these mass protests that are burning our country. The analysis is tentative, sometimes deep but often not on the side of the poor.

What we do not hear are the voices of the protestors themselves – at least not in more than quick sound bytes in a heightened situation.  We never hear the full analysis of the community leaders or the protestors.  And so we are left believing that these outbreaks of ‘violence’ are spontaneous and irrational.  We are left with the impression that suddenly one day a few hundred people woke up and started burning tyres, dancing and demanding stuff from government – ‘just because.’  We are left with the impression that the black and poor are entitled, lazy, out of control and a threat to our safety.

And this is why when the police kill twelve protestors in the first month of 2014 there is hardly any outcry from the public, because deep in their subconscious they believe that these protestors deserved to die.  We do not hear the demonstrator’s version of events and many do not want to hear.  There is no show of empathy or outrage for the dead or the poor.

The media has a lot to do with the lack of empathy the middle class and the wealthy have for the poor.  We could go as far as to speculate that it is in cahoots with a neoliberal government that seeks to create an ever-widening cleavage between the classes.  We could also be correct in assuming that this is all part of social engineering – to present the poor as irrational and dangerous to us all.  To report on the ‘real’ crime statistics at the same time as the country burns ensures that the middle class closes rank on the poor and invests in even more security.  In this way they are ideologically tamed.

They do not relate to the struggles of the poor or see the intersectionality between their struggles and those of the vulnerable communities that are stamped all over our landscape.They will not facilitate or assist in the mobilizations of the poor in their quest to claim their basic rights.  They will not sign petitions demanding the cessation of undue force and live ammunition at protests for simple basic rights.  They will not empathize with the poor or unpack the multiple layers of oppression that the economically disenfranchised are forced to shoulder in a neoliberal system where the trickle-down effect is as mythical as the rainbow nation. They will not even begin to understand that they themselves are an engineered buffer zone between the elite and the poor and that it is they who are used to oppress the poor, exploit them in work situations and are even manipulated by the media to ensure they do not embrace the humanity of the poor as equal to their humanity.

The mainstream middle class will also never get to understand the level of organization that goes into social justice mobilizations in marginalized communities – often with an absolute lack of resources — because the truth is that the media never investigates these issues much further than the sensationalist visuals and précis analysis of so-called violent protest action.

Struggle is a process – not a spontaneous outburst of irrational violent behavior as witnessed on the mainstream news.  Behind those visuals is a history of caucusing with different factions in community structures.  There are residential meetings in community halls to find a common way forward. Many people are unable to get to their jobs when protests occur and these issues have to be discussed and negotiated to try and avoid community factions fighting each other instead of the issue at hand.  There are requests and demands made to ward officials and letters written to the provincial Government officials.  There are complaints and applications and affidavits signed.  There are permissions sought to march peacefully. There are even discussions with the police.  This often takes months of organization and these initiatives are very often ignored or thwarted by bureaucracy and official insensitivity towards the community grievances and requests.

When none of this garners any response – or when the response is the top down ‘you will do as we say’ reaction from uncaring officials, then does the community take to the streets with burning tyres and blockades and struggle song and dance.  It is then that the human spirit will not withstand the cancellation of their human status and ignorance of the multiple layers of oppression that they are forced to carry and endure.  It is then that the human spirit will rise up and demand to be recognized.  All the so-called violent protestors are asking for are the most basic of services.  They are asking for their dignity to be recognised in proper housing and sanitation and primary healthcare and equal opportunities.  They are asking for the same things that any human being would want – in good education for their children, in job opportunities and access to food and water.  How can the public or state ignore the plight of its own economically disenfranchised people and not expect the people to rise up and turn their requests into demands?

But the SAPS are called in to work on behalf of the state and their corporate partners to keep the protestors down  – they shoot rubber bullets and sometimes, it seems, a few rounds of live ammunition.  Some protestors will die for rising up to demand what is rightfully theirs.  Armies of privatized militant security forces such as the Red Ants are brought in to intimidate the community.  They too are armed.

The TV News stations come and film the protest action.  They invite an academic commentator to tell us, the viewers, why this is happening.  But we never hear about the full frontal war on the poor from the poor themselves – their own deep analysis of the situation – the processes that led up to the protest action – the depth of their burden and their sheer determination to be recognized as human.

Until we hear the voices of the marginalized on our mainstream platforms – until we see the human face of these uprisings and hear the analysis from their perspective, we will never have a public that understands why people rise, why people are at the end of their tether and why it becomes a last resort for them to burn houses and police stations to make the world sit up and notice the multiple transgressions that are perpetrated against them by an anti-poor system.

The middle class needs to start feeling some outrage and empathy for marginalized communities in South Africa – after all they deal with similar issues such as exorbitant electricity tariffs, eTolls and uncontrolled communication costs.  Their growing debt in trying to keep abreast of petrol price hikes and all the other expenses that are forced upon them is an iota of the struggle the poor endure in trying to keep abreast of these costs on tiny indigent grants.

And the mainstream media could go a long way in changing the middleclass narrative around the poor from one of ‘disapproval and disdain’ to one of ’empathy and outrage’.

In the end the system is working against everyone except the elite.