HomeArticlesWe are Fighting for Free Higher Education; the biggest Salary Increment our Mothers will ever receive! 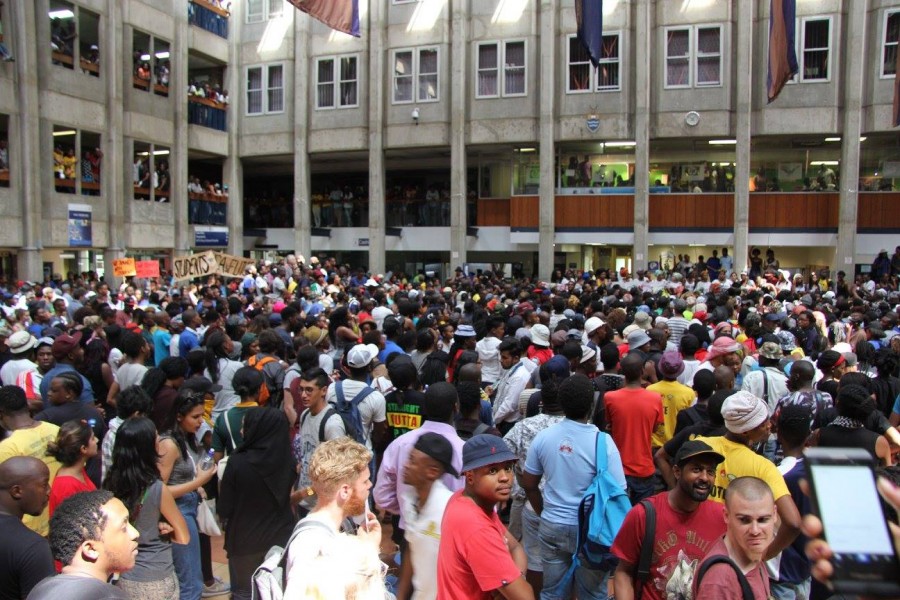 If you take my mother’s annual salary and multiply it by three years, she still wouldn’t afford to pay for a single year of study at the University of the Witwatersrand. She is one of many cleaning mothers across my country who leave home at 4:30 AM and return from work around 18:00 PM. Over the years, their salaries have been nothing but stagnant when compared to the ever increasing cost of food, transport, electricity and other basic necessities. This has been my mother’s routine for the past 26 years and sadly, this routine has conditioned her to genuinely believe that what she receives as a cleaner is what is due to her, nothing more nothing less.

If this revolving door of poverty and marginalization is not militantly disrupted today, the majority of South African sons and daughters will follow on my mother’s footsteps of normalized pain and conscious submission to a humiliating system. This is the lens through which one must look at the revolutionary anti-fee increment movement led by Students Representative Council at the University of the Witwatersrand and other campuses across the country. It is for this reason that I argue that free higher education will be the biggest salary increment our mothers will ever receive in their lifetime.

Restoring the dignity of our communities and safeguarding our future and that of our country is an ideal that we must beg no one for. The current wave of protest must mark a declaration of war to all those participating in the commodification of higher education as a product in the market. The time for rhetoric has come to an end, we must take it from here. Our movement as students must transcend the walls of individual campuses and move with the necessary speed towards the National Treasury and the Department of Higher Education and Training.  Our employees at both departments must pass legislation that introduces a higher education tax on all monopoly capital industries, foreign direct investments and the wealthy as determined by their household income. All funds collected from the higher education tax must fund the immediate widening of participation in higher education through the realization of free higher education by January 2016, massive investment in new higher education infrastructure, limiting universities’ institutional autonomy (particularly their ability to determine the cost of academic programmes) and the adoption of a “People’s University” approach to further decolonize their higher education landscape in South Africa.

Our call must be guided by the principle of redistributive justice and not another misguided rainbow nation approach. We must not fall into the trap of calling for free higher education for all. Our call must be for free higher education for the poor and the working class as determined by household income. We cannot afford to subsidize the wealthy; they must continue to pay.

Every revolution will be confronted by reactionaries who seek to protect and maintain the status quo. In this regard we must ignore co-opted anti-blacks like Mondli Makhanya, editor of Sunday Times newspaper, and his masters, who find it reasonable to refer our peaceful protests as hooliganism. When University of Cape Town says our protest action is disrupting the academic project, we must remind Max Price that the continued commodification of higher education has disrupted our academic project for decades. The University of Cape Town’s response to students’ protests is as irrational and the judge who granted them a court order to stop students from demanding their constitutional right to education. We must not be easily discouraged. We must remember that our struggle today is a logical continuation the struggle of the class of 1976. If they could confront the apartheid regime’s live ammunition head on, surely we should be able to keep Mondli Makhanya, Max Price, Police, Judges and their masters on their lane.

If the ladder of educational opportunity rises high at the doors of some youth and scarcely rises at the doors of others, while at the same time formal education is made a prerequisite to occupational and social advance, then education may become the means, not of eliminating race and class distinctions, but of deepening and solidifying them.  These words by President Truman in 1947 summarize how the higher education in South Africa continues to reproduce and reinforce social inequality while sabotaging the project of nation building.

Finally, I would like to commend student leaders at the University of the Witwatersrand for literally bringing university managers down to earth. I remember sitting on the 11th floor negotiating with Wits Management on why fees should not increase. A mere 10 Minutes into the negotiations, a very arrogant university manager stands up and arrogantly say “we are clearly disagreeing, lets vote”. She knew that the whole council, predominately made up of old conservative right wingers, would vote against the students’ lonely voice as represented by myself.

Thank you for turning the tables in your numbers and may the struggle continue!