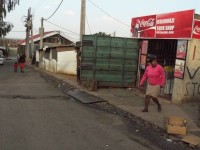 I have often wondered when I was younger why during the week I would sleep in a nice house where my grandmother worked as a domestic worker in the suburbs but on the weekends get into a taxi and sleep in a small hose in Meadowlands. It was with time that I realised I had apartheid to thank for this. I realized that because my grandparents were black someone decided they were not good enough to live a place of their choosing. So he designed a ghetto a place where he would place this trouble that was a black man.

I find it rather strange that black people who fought indefatigably to attain freedom would not insist on destroying this construct designed to disempower them. The same place created to segregate you because you were once thought not to be good enough to live in Sandton. Soweto, Alex, amongst others,  are today hip and happening places with skyscrapers which compare to those in white suburbs. In Soweto we build malls that white people have, nice pubs and restaurants that rival the ones in the North. However our schools are still not private or have the same standards of white schools in white suburbs. How many private schools do we have in townships of South Africa? Those with the means to send their children to schools in white suburbs–  however they live in a R1.8 million rand house in Diepkloof extension. This does not make sense.

We seem to be strengthening this atrocious system meant to keep us locked up in the townships. We disown and cast out those who defy the system and buy houses in white suburbs and send their children to private schools in white suburbs. We call them all sorts of names: sell outs, coconuts, model c’s etc. and yet we continue to sleep in dining room floors of houses sometimes without a bath or toilet indoors and sometimes no toilet at all! Today generations upon generations of black children still live in their grandmother’s apartheid match box house many without the hope of ever leaving. We are famous in townships for backrooms known as a ‘’two rooms and garage’’ cottage like structures. Some are bigger and fancier than the main apartheid match box house. If you asked me this the best form of gloried oppression … just with a DSTV subscription and sometimes a fancy BWW parked outside.

We seem to forget that none of our grandparents chose to live in a township and that if they had the power to, all of them would have chosen to occupy any part of South Africa they liked.   Perhaps then many of us would live in places today we call Sandton, Ballito, the Waterfront and other affluent suburbs.

The white man still has us locked up in a camp far away from him and all his splendour, with big nice houses, cars, swimming pools, tennis courts, state of the art hospitals and schools. Not enough black people live in white affluent suburbs and this is largely because of our own doing. This way the white man still has us oppressed and we do not even see it! The white privileged, racist South African disguises himself as a liberal and comes to party with us in the township, feeds us the same alcohol he sells to further oppress us, laughs at us then gets into his car, hits the highway and sleeps in a triple story house far away from us and our burden to him. We in fact support his evil ways and continue to lock up generations upon generations of black children in different townships in South Africa.

Black people with the means must leave the ghetto and set up roots in places where it was once not possible for him to live he was not free, unless if indeed the black man even the ones with the means to are not free in a democratic South Africa.

The ghetto was designed purely to oppress us and an unoppressed black man must make it his sole mission to leave it.