HomeSocioeconomic JusticeA Trip into Alexandra Township where babies and the elderly are killed by rats. 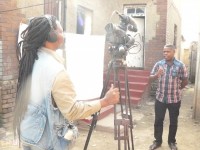 Johannesburg – A one month-old baby whose three fingers and part of a nose were eaten by rats in Alexandra, Johannesburg is awaiting surgery as her family cannot afford it, The New Age reported on Wednesday.
The rats attacked Erena Yekanyi at her home last Monday.
“I was washing outside while Erena was sleeping inside the house. I heard her cry and when I ran into the house, I found her covered in blood,” the baby’s mother, Thandaza reportedly said.
The baby would continue to await reconstructive surgery at Charlotte Maxeke Academic Hospital until her mother was able to raise funds for the procedure.
The attack was not the first in the township, according to the report.
Children and the elderly have reportedly been killed in their sleep by rodents that are said to be larger than normal rats. (SAPA)
In this video we hear from residents of Alexandra about the lack of sanitation and waste removal in this area… where people live in makeshift shacks along the Jukskei River.  Alexandra is the oldest and most densely populated township in South Africa.  The poverty levels are high and joblessness results in high crime rates.