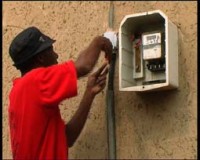 When the African National Congress (ANC) came to power in 1994, one of it’s priorities was to make electricity accessible and affordable to all South Africans.  In some respects the government has been successful in this regard, having connected more than 2.5 million additional homes to the electricity grid with plans for 600 000 more connections by the end of 2002.
This push to expand access to electricity has been undermined, however, by its lack of affordability.  High per-unit costs for township dwellers — typically 30% higher than white suburban areas and up to ten times higher than off-peak prices offered to industry — has meant that low-income households are unable to purchase the volume of electricity they need to sustain even the most basic requirements of heating and cooking.  Self-imposed reductions of electricity usage, combined with aggressive cut-offs by Eskom for nonpayment of bills, has meant that tens of thousands of low-income households are without the electricity they need, with dire consequences for public health and safety and poverty alleviation.

This documentary follows the struggle of the community as they reconnect their electricity in defiance of ESKOM’s brutal cut offs.