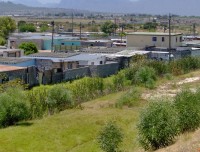 A community near Cape Town is shocked and in despair after discovering that many of its members are being evicted from houses they had purchased a few years back. A number of residents in West-Bank, 20 kilometers outside of Kuilsriver, did not seek legal assistance or even ask the owner to fully transfer title deeds when brokering a house deal. Therefore,  after years of staying in their homes which they purchased for cash, they discover that the previous owner resold the house to someone else.  They also sometimes return and claim their houses back.

According to a senior official at the Kuilsriver municipality, many of the previous owners come back because the value of the houses have sky rocketed to nearly R100 000, which is 10  times higher than the prices during the time they were selling. As result a lot of these people come back because they have learned that the market price for houses in that area has gone up and it is far higher than the R10 000 or R20 000 they sold their houses for.

“Many of the people who come back to reclaim their sold houses are those who know that they never legally transferred these houses during the time they were selling. These people are very clever, because sometimes they would use their house to make loans from banks and use the house as surety. And unfortunately the new owner does not follow proper procedures of buying a house. Therefore because they know that new owners never made any changes on the title deeds of the house, they come to our offices inquiring about the market value, and because according to our system, they are still the rightful owners, we can’t refuse to issue of the house, because they are still legally the owners and we cannot refuse them these papers,” said the official.

Madoda Madasi, chairperson of the South Africa National Civic Organisation (SANCO) in the area, said that there are quite a number of cases that have resulted in people being evicted.  “We are trying our utmost to assist these families, but it’s difficult”.  Madasi went on to say that for the majority of the poor, owning your own property is deemed as the highest form of investment. Often though, they do not know how to make these transactions safely and in a way that would save them money and time. “Many  unsuspecting people end up losing loads of money, because when they buy a house they completely trust the person to never return after paying them their fees – but now since the value of these houses have gone up its quite shocking how many people have returned claiming their old houses back.”

Meanwhile a 49 year old woman in the area found herself trapped within this bubble of corruption and fraud. Faith Ntombifuthi Zokufa bought a house in 2008, only to find that the previous owners of the house, Stephan and Maria,  had used the house as assurance when they took out a loan in 2003 from standard bank. Zokufa says that she had been looking for a house to buy for quite a number of years after realising that she was not going to receive a government sponsored house due to the backlog that the government is faced with.

“I thought I was going to enjoy my life in peace when I retire. I had saved up some money while I was working and I decided to invest my money by buying a house for me and my children. Well to make the long story short, in 2008 my sister met a coloured couple whose full names are known to me, and made arrangement of buying a house that these two were selling for R75 000. During the time they were negotiating, I was in the Eastern Cape and as a result I transferred money through my sister’s bank account. I had also made provision for my sister to seek legal assistance, thus I sent R80 000.  This was for provision for a lawyer, but my sister never did as I had requested her. “said Zokufa . She went further saying that after a couple of months in the house she decided to make renovations because the house was unbearable to live in due to many visible damages.

“When I arrived in that house, doors were not proper, windows were broken and the bathroom not even there. So I had to fix them myself. Then I started extending the house, I also started putting up security measures around my house.  I put fences right around and this all cost me plus- minus R55 000. As time went on my problems started, I am diagnosed with a heart condition. I have tried fighting this issue but being black and poor in this country is another curse in itself. Therefore I appeal and hope that there is someone out there who could help me, because I have been into every office – from that of the premier Helen Zille to  the office of the Public Protector Thuli Mandonsela – but until now I have not received any assistance.” said the visibly traumatised Zokufa.