HomeArticlesMr X – An Exercise in Deflection of Justice and State Savagery? 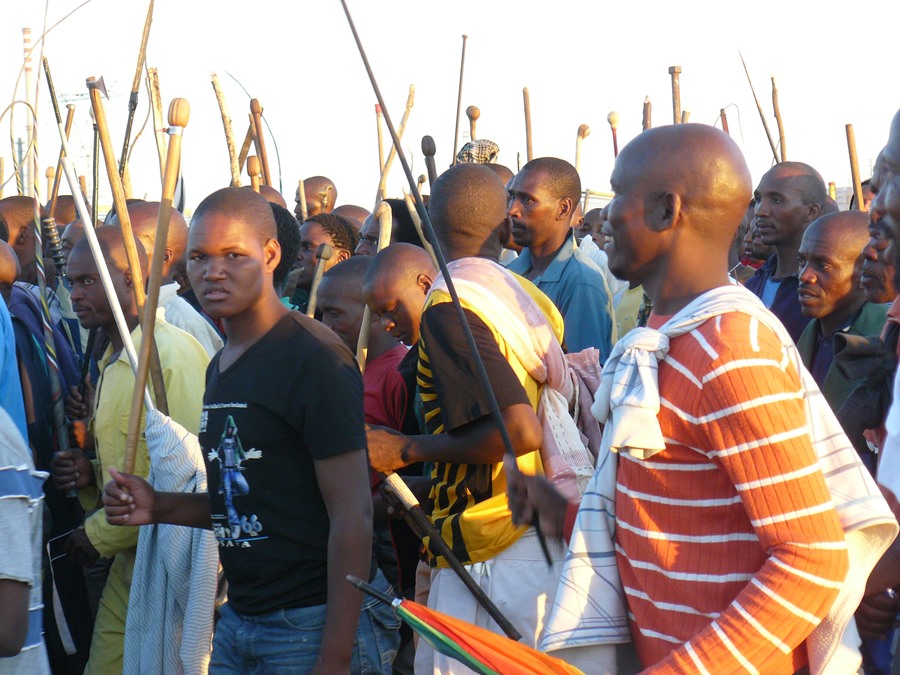 Chillingly, Mr X’s testimony has all too easily fueled the imagination of the South African public and has stepped up the state-biased and business-friendly mainstream media campaign against the miners – a campaign that set out to demonise and inferiorise the miners back in 2012 right before and just after the massacre.  Here we saw this partiality in the repetitive close up shots of a mine worker licking the blade of his machete as squadrons of men in warrior formations holding knobkerries, sjamboks and machetes filled the TV screens in our own homes, creating the subliminal impression that we too may be invaded by marauding troops of Black men with pangas and spears and fueling the latent nightmares of those not Black and African.  These images stoked the rudiments of the ‘us and them’ scenario.

The depiction of Black male collective body in ‘Impi’ (warrior) formations fed right into the colonial myth of the ‘savage Black man’ which is already manifest in the wider collective white imaginary – as this inherited colonial construct became reconstituted in a contemporary setting. The rationale behind this construct remains the same as that used in the days when Europe set forth to ‘civilise’ the darkest Africa and the ‘demonic’ Black male  expanded the ‘monstrous human’ archetype already alive in the European collective consciousnesses.   Frantz Fanon in his seminal text Black Skin, White Masks,’ explores this dark fear and negativity towards the “negro” in his writings on European civilization.   He points out that this negativity is “characterized by the presence of an archetype: an expression of the bad instincts, of the darkness inherent in every ego, of the uncivilized savage, the Negro who slumbers in every white man.”  He called this “negrophobia” – and recognized it as an embedded fear in the European psyche.

On first meeting so-called Black ‘savages,’ the darkest imaginary fears of the European collective conscious, expressed in mythical monsters, witches, ogres and Satan himself, were readily augmented by the “Myth of the Negro” and his “inherently evil nature”.  According to colonial logic the black man had to be repressed, oppressed and controlled lest he wreak his evilness onto white people of ‘Godly’ stature.  This constructed narrative fed the systemic framework that allowed the shackled Black body to become an abused commodity, enslaved and used as free labour to build up a capitalist empire exclusively for white enjoyment and benefit.

How is this much different to what is playing out in the Farlam Commission, where the matter of the who is responsible for the killing of 34 miners is being legally deliberated?  These were workers who were merely striking for better wages and a human standard of living, but were brutally mowed down by the South African Police Force with live ammunition on instruction from a corporatist state. It seems that those who survived this massacre are now being demonised and cast in the light of uneducated primitives capable of unspeakable acts of violence, as a way to justify this state and corporate brutality.

In this framework, Mr X’s dehumanizing testimony could well be another neocolonial construct being utilised to debase the miners even further as images of cannibalism and chopped up body parts flood Mr X’s narrative, ensuring that the wider community of newspaper readers and television consumers applaud the harsh treatment of strikers, both now and in the future.  It is an easy move to pull in a Settler society because “negrophobia” is still the premise for racism and manifest in the lack of empathy for Black body from the wider white public.  This white disconnect to suffering of Black body signifies the embedded racism in the white collective as there seems to be an almost complete lack of  empathy for brutalised Black body in our public spaces.  This was most clearly seen in the lack of white public outrage around the Marikana massacre.  Of course there was outrage by leftist and progressive whites, but the majority endorsed the massacre via their silence.

Fear of the “Black male savage” construct  still lurks in the white imaginary and shows itself in what people write and say about the  Black male’s so-called inherent violence.  It is indeed, a phobia in the larger non-Black African community and is evidenced in 12-foot walls and high security investments in wealthy neighbourhoods – all to keep the threat of the ‘violent and economically poor Black male’ at bay.

Fanon argued that because the white fear of Blackness becomes a phobia “its affect has a priority that defies all rational thinking”. “More than just this,” he writes, “in a proper phobic reaction, one endows the object of evil intentions and … the attributes of a malefic power.” And this is exactly what is playing out in Mr X’s testimony, when he describes the malefic, cannibalistic nature of the miners, whom he testifies, ate the flesh on one of the murdered security guards in a ritual led by a certain Sangoma -while the general public lap this up as an indisputable truth about Black men.

The tragedy inherent in this construction is that even if a small group of miners did partake in this alleged ritual, the entire community of Black strikers has been implicated by association, and are thus collectively dehumanised and satanised.  This creates a massive empathy chasm between the public and the miners as the focus becomes fixated on the act of savagery and is deflected from the loss and trauma the mine workers experienced at the hands of the state and state mechanisms.  It cancels out the human narratives of mothers who cannot afford to fulfill their aspirations for their child’s education because of low wages – or husbands who want to build homes for their wives or buy a car or further their education.  It cancels out the pain and frustration felt by people who live without toilets and taps and whose babies often do not live beyond five due to environmental related disease or opportunistic infections caught in unsanitary conditions. It does not speak to the inadequacy of low wages to feed and nourish families and does not begin to imagine that depression and stress and anxiety are conditions experienced by people coping with loss and abuse – or acknowledge the bravery, the tenacity and strength of the mine worker community as they held out for five whole months from going back to work in order to change the rules of economic justice for the wider South Africa.  It deflects entirely from the issue of economic justice and the humanity of the mine workers.

What Mr X’s narrative also does is shift the focus from the systemic and monstrous corporate exploitation of human beings and the reality of a modern day slavery onto the alleged barbarity of the workers, and plays down the actual savagery of the police brutality meted out on the working class in a corporatist state that honors wealth over social justice. In short it shifts the blame to the victims and one man’s seemingly fallacious and unlikely testimony is what could seal the fate of the miners and their families as well as the future of justice for workers who strike in this country. Unless, that is, Budlender can prove without a doubt that this man’s shaky testimony has indeed been concocted by outside forces to justify the most atrocious act of violence against citizens in our so-called democracy.