HomeArticlesUnderstanding the Struggle Songs of Fees Must Fall 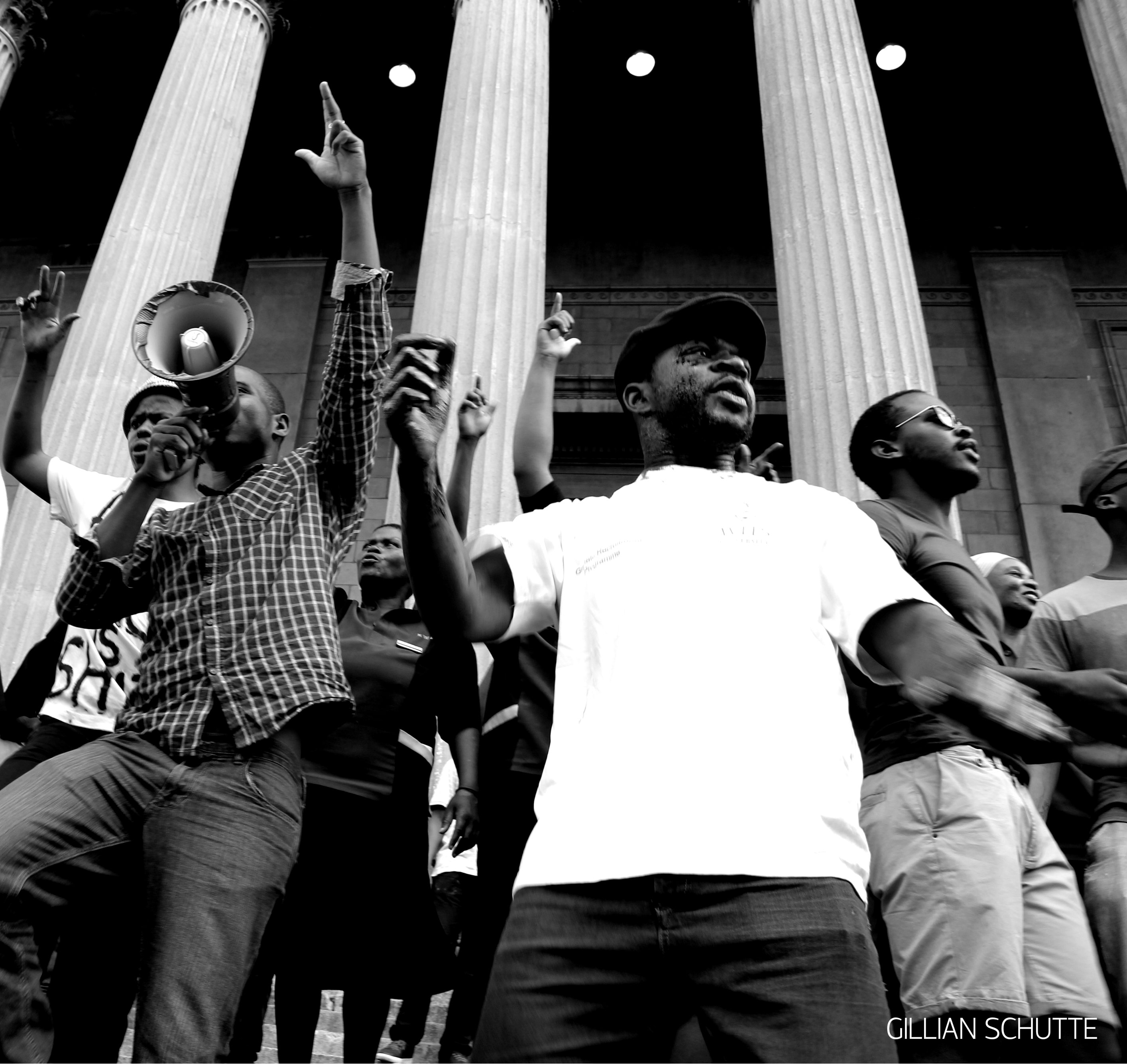 In this entertaining article I intend to have fun with the struggle songs, fun in the sense that, I will translate and analyse them. I’d also sing them, as you read. It is just unfortunate that we are not at that level of technological development. Or rather I lack the technical knowledge that will allow that to happen. You can however contact me subsequent to reading this article so that I give you names and/or contacts of some of our Brenda Fasis and Zaharas. One surprising factor is that: from all the students’ organisations, it is predominantly males who lead songs. Something that I’m by the way against, because everywhere else, women lead songs, and they do so beautifully (churches & mix gender choirs to mention a few). But enough with musical politics, let’s now get into the songs.

There have been robust arguments during the struggle around which song takes the award for song of the year. The battle was between two songs which I hope not that their lyrics are all over exam scripts around the country. This is a battle between Shiwelele and Solomon. Because of this, I will start by discussing the origins, histories and the lyrics of these songs, before moving on to other songs which were equally important to the struggle. Though not important, please not that none of the two is my favourite.

Iyoooooooh Solomon
This is a song that commemorates the life of a struggle hero Solomon Kalushi Mahlangu. The lyrics of the song give a brief history of the late MK militant who left the country to be trained as an MK operative in Angola and Mozambique. This was following the 1976 Soweto uprisings which he was not part of. He came back to the country via Swaziland in 1977. Solomon Mahlangu was arrested and executed by the apartheid government. He died at the age of 22 and his most famous quote is a very inspiring one which states “tell my people that I love them and they must continue the fight, my blood will nourish the tree that will bear the fruits of freedom, aluta continua.” The song says that Solomon was a soldier of uMkhonto Wesizwe who killed the “boers” all around Afrika. This is a song which not only gives young leaders in the struggle courage, but also brings out the brave side of each comrade in the struggle.

Shiweeeeeelele
Shiwelele is one not rich in history, it has been very popular following the establishment of the Economic Freedom Fighters Students’ Command (EFFSC). Peter Keetse is the national spokesperson of the EFFSC and those who’ve been lucky enough to hear him lead the song will tell you that he does so exceptionally and brilliantly. Lyrically, the song speaks to the issues of students, but has since been modified to accommodate workers as well. The most prominent lines in the song is “We are going to learn by force” (sizo funda ngenkani) which was altered to suit the workers and became “We are going to earn by force” (sizo gola ngenkani).  It also calls on students to come together and unite (bafundi hlanganani). The song finally taunts management, saying either “management is playing with us” or “a component of the system is playing with us”. By “us” it is referring to the protesters, the poor and working class. A part excluded from the song by the FeesMustFall movement is the “commander thethelela” part, this is because the movement had not an elected leader who was seen as standing out in the forefront. This is a song that will in the future continue to be sung in students’ and workers’ protests due to its relevance to the present day struggles.

“Thio thio, thio mama thio, khutsa khutsa, khutsa baska go thunya”
This is usually chanted between songs, when the Zahara is thinking of the next song or when handing over to Brenda Fasi. Among the favourite intermediate chants is “come guerrilla (hous)- nyamazan’ (hous hous)- rubber bullet (hous)- chocolate (hous hous)…teargas (hous)- cigarette  (hous hous). These are chants adopted from the old struggle days which were largely used to taunt the police officers deployed to control the protests, or rather kill the protesters.

Twenty one years into democracy, one would never expect to sing such a song. “Amalungelo (thina si lwela amalungelo wethu). This is a very emotional song, in which protesters are saying “we are fighting for our rights”. For example as students we were fighting for our right to education. A right which has been commodified, this means in our democratic state we are buying almost each one of our rights, food, shelter, water, and of course education. But I’m not going to go into politics.

“Elilizwe lo khokho bethu, elilizwe la bantu aba mnyama”
One of my favourite songs by far, a song that is not too relevant to the FeesMustFall or EndOutsourcing struggles but since these are issues that predominantly affect black people, perhaps the roots of black people issues should also be addressed. This is also a struggle song from the past, wherein the protesters are expressing the fact that we are protesting for our grandmother’s and black people’s land. Remember that as black people we are robbed of our identity, our land and everything valuable thing below and above the soil. Perhaps this is a battle that should have been fought and won prior to 1994, but then again due to avoiding politics, I’d rather  move on to the next song.

The next two songs are generally workers’ songs.“Gudala si sebenzela amabunu” and “thina senza nje ma sifuna imali”. The former is a song that is directed at workers, acknowledging the fact that, we (black working class) have been working for the ‘boers’ for waaaay toooo loooong, and workers need to unite. It goes on further to say that “this land is ours” and again “workers unite”. The second song is very popular in wage increase demand protests, and caries the message that “we (black working class) do this when we want money, we don’t work we sit”. Such songs were for a change led by the women in the struggle and are one’s that will continue to be sung as long as we live in a capitalist state.

By now you will have realised that it is quite difficult to avoid discussing politics when analysing and discussing such songs because these songs emerge from the oppressive system that continues to alienate the black poor and working class in their own land. Anyway, the very same politics of inequality are the very source of the next two songs. “Asina mali asi sebenzi”, “asina mali asina lutho”, and “Agenda ya ma capitalist”. When sang by students, the first lyrics are used, which mean “we don’t have money, we don’t work” while workers say “we don’t have money, we have nothing”. By now you will have also realised that most of these songs are about land or money, or land and money. The second song quite short and says we are not interested in capitalist agendas.

“Sise ndleleni siyeza”
“We are on our way we are coming”. A song that is directed at management, with a message that we are coming. The song is often followed by my favourite song. “Ma si fika thina, amagwala a zo baleka”. Another one of those adopted from the liberation struggle. Perhaps adopted from comrades in exile as the message says that “when we get back, cowards are going to run away”. In some instances places at which comrades were exiled are mentioned. For example, “when we get back from Angola, amagwala azo baleka”. The song also says that “a leader of management is going to resign at gunpoint”. This is a very radical and militant song. Perhaps my love for the song was enhanced by the 24 hours I spent behind bars thinking of how we’re going to intensify the struggle when we get out of there.

One thing we were hoping to get when we leave prison was more support and more students joining the movement. Perhaps this is where this classic song get in. “Uzo joina ma joina ma, uzo joina ma si hamba”. This is a song that calls on everyone who is a victim of the system to join the movement. The song has recently been modified and made more fun, where comrades are asked by the leader to show some of the most popular dance moves of today. Failing to do so, the rest of the crowd will shout “ha a e tsebe” which means “he/she cannot do it” and if the opposite happens then the crowd will do likewise. This will usually be followed by laughs.

“Emaweni we mama no baba…amabunu si’a qcibile”
A very emotional song, that will always be in my heart. As I walked out of Brixton Police station after my night in jail together with the other 140 comrades, the crowd standing outside was enthusiastically singing this song as they were happy to see us being released. As we were being welcomed back with hugs and handshakes-I think a few comrades also got kisses-, I was touched by the support from the cohort that had been camping outside the police station for the whole night making sure that we get food, blankets and legal assistance. My heart was filled with joy, the tears from my eyes wept the anger away, and I was motivated to keep on fighting. One last song which was very popular in thus struggle was “roba“. Another one popularised by the emergence of the EFF. The song conveys a message that “we are going to break them up into pieces”, “we don’t want capitalists, and we are going to arrive with socialism”. This is one song that is capable of revitalising comrades when the morale is down.

There are other songs which were not so prominent in this struggle, however these are songs which have always been there, and were sang occasionally. These include songs such as:
“Senzeni na” (what have done)
“Asisa lali emakhaya” (we sleep in our homes no more)
“Azania” (the best struggle song in the history of African struggles)
“Ayasaba amagwala” (cowards are afraid)
Winnie Mandela uzo si nig’ i bazooka (is going to give us a bazooka)

Wait! I almost forgot two very important and enjoyable songs. “batla itshola mama, ba tla re sheba”. This song is accompanied by a particular dance move using only one hand. It is directed at both management and spectators of the protest, saying they will watch us, they will regret what they are doing. “Yimbi lendawo” is another song that is very emotional, it means this place is bad, referring to the institution.

There are also songs that honour fallen heroes and heroines of the struggle. A difficulty that song leaders had to deal with was avoiding mention of any political party as the protests were said to be non-political. One factor that certainly worked in the favour of the protests is the divorce of party politics and unity which was shown but all students and workers, irrespective of political affiliation. As you were reading this, I hope you were able to figure out which is the song of the year. Solomon? Shiwelele? It’s up to you…