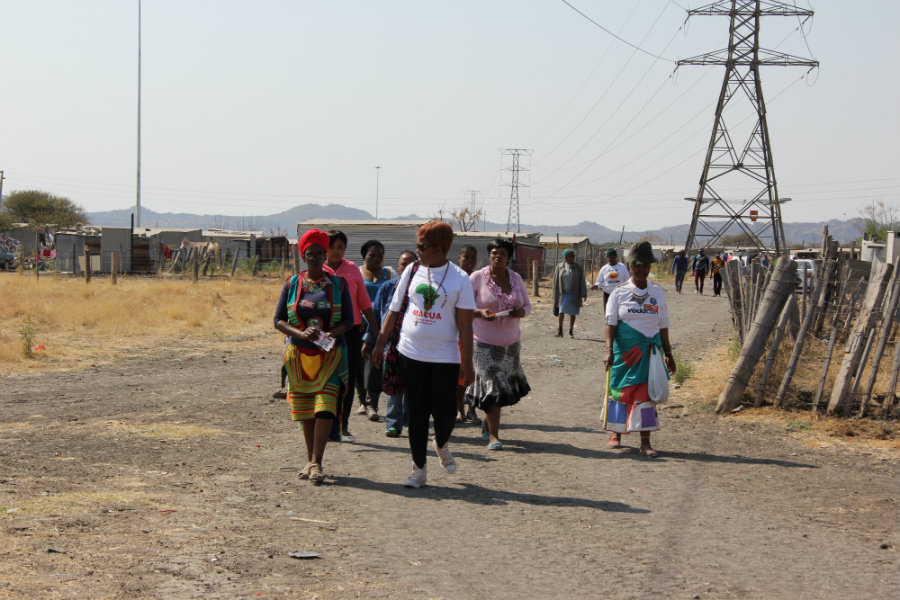 This women’s month marked two years since the Marikana massacre. The widows of the workers killed by the South African Police Service in 2012 have since received their deceased husband’s provident fund dues, but still wait for justice whilst the media and public attention has long since transferred from their plight to the Farlam Commission.

The focus recently has been on the prolonged strike action on the Platinum belt as well as Mr X’s sensational testimony alleging that muti and body parts were being used in flesh eating rituals by striking miners back in 2012.  This is what has gripped the imagination of the public, many of whom are quick to believe this anti-black narrative – a similar narrative that was used by the apartheid era South African Defense Force about black soldiers in the border wars when they spoke of bloody rituals used to turn bullets into water.

Meanwhile the widows have been all but forgotten and though the mining company Lonmin has taken on the responsibility of their children’s education and also offered a male member of the families of the deceased a job on the mines to replace the breadwinners slain by the police, they say they have not been adequately compensated for their loss.

“Yes it is true, these things have happened, but what is the use of sending our kids to nice schools if they come home to no food, a tin shanty and so many problems that have not been dealt with? A breadwinner in the (extended family) does not mean that our needs are met. He has his own wife and kids to think of. It causes infighting in the families too. They did not even consult us properly to find out what we need. Maybe we could have been given the jobs,” says Thabelo Mutzumi*.

Sikhala Sonke (We Cry Together) is a widows’ support group. At a recent meeting in Wonderkop, many of the widows spoke up about their ongoing struggles. They expressed frustration with the drawn out Farlam Commission and all the government cover-ups. They feel that government is unwilling to compensate them for their loss in order to avoid an admission of guilt. Mr X’s story in particular was cited as a constructed decoy to divert attention away from the issue of justice for the widows.

“We don’t know what we did to government to make them hate us this way and treat us with no respect. Our houses are falling down and they have never delivered on the stuff they promised us…I pray a lot to ask God to help us, but sometimes I even doubt God’s existence because of our suffering,” says Mutzumi.

At the same time, Lonmin continues to fall under the radar when it comes to accountability for the substandard conditions of the settlements around their operations where taps are few and sanitation non-existent. This places the added burden on women who spend much of their day collecting water at late hours from taps that are a distance from home, in addition to collecting firewood for cooking, as there is no electricity in the informal settlements.

Daily life in Wonderkop and eNkaneni for women is hard, much harder than anyone who has not experienced poverty can imagine. The area looks like a surreal medieval landscape dotted with signs of the age of technology in hand-painted cell phone signs that hang lopsidedly off the walls of tacked together corrugated tin shops.

What we find in these areas are desperate workers struggling to eke out a living, though they are employed by a multinational mining concern. We find tin shanties surrounded by muddy walkways that are hard to navigate by foot or cars. We find little children playing in this mud and on mounds of waste and litter, because services are few and far between. Neither government nor the corporates have even considered building these children a playground or crèche.

Here there are no toilets and women are at the end of their tether in trying to manage their families sanitation needs as well as feed families of children whilst unemployed. HIV levels are high, though the corporate reports will say that few people suffer from this virus under their watch. There are also high levels of respiratory diseases and cancers due to environmental toxins in the air, water and the land that the communities are built upon.

Benchmarks Foundation research indicates that the mines in the Rustenburg mining belt are poisoning the land and the water through unchecked polluting. Toxic sulphur dioxide leaks spill into the water sources that supply the communities who then have no choice but to drink from and wash in it.

This harsh reality completely contradicts what the mining companies are telling the global public. They claim, in sustainability reports that go out to the world that they invest amply into these communities. They also claim that they work hard to improve upon their poor environmental track record as they aim to reach a state of zero environmental harm to surrounding settlements.

But, says John Capel of the Benchmarks Foundation in a May 2013 interview, these promises often play out as confessions around pollution spills and other environmental transgressions, always with the disclaimer that they plan to fix it all. It is a never-ending confessional as nothing ever seems to improve and not enough pressure from the government is ever exerted onto these companies to clean up their act. The reality, according to Capel, is that these corporates are putting little more than 1% of their profits back into developing these communities or cleaning up their operations, despite their claims on paper.

Though it is clear that these dire socioeconomic factors are the root cause of strike action and unrest, they are often the most overlooked in the analysis offered on media platforms for why strikes and civil unrest occur. The Farlam Commission’s focus has been dominated by Phase One of their inquiry, the issue of police brutality against the miners. This should have been concluded ages ago to begin concentrating the inquiry on the systemic socio-economic factors that contributed to the strike action in the first place. Phase Two of the Farlam Commission, in which the socioeconomic conditions of workers and communities will be brought to the fore, is only getting off the ground now, some two years after the Marikana massacre.

Meanwhile people continue to live in sub-human conditions. This is a human rights concern and ought to be tackled as one. While people are being exploited, enslaved and violated with impunity by multinationals and while this is well hidden behind expedient social investment advertorials and green washing campaigns, human lives will continue to be expendable and worthless to corporations that put profits before people.

This is ultimately the premise for the strike actions that arose in 2012, which ended in the massacre that left so many women carrying the burden.

It is time for Lonmin to be held accountable for their role in the massacre and to adequately compensate the widows of the men slain for asking for a better life – a life of dignity for themselves and their families, the same dignity that the constitution promises all in South Africa.

It is also time for the general public to refocus on these socioeconomic issues through the lens of the women and the widows of Marikana and join them in solidarity in their call for justice from both Lonmin and state.