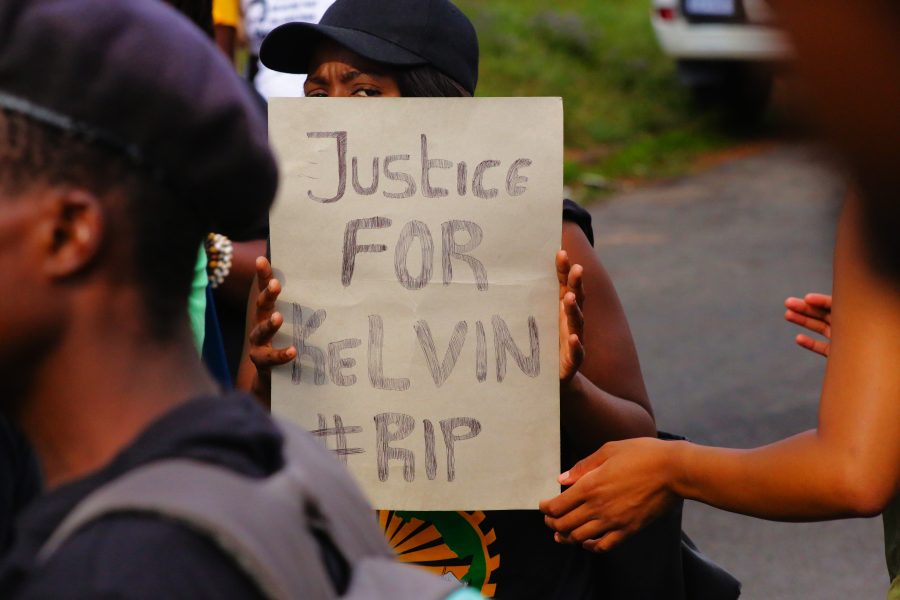 MEMORANDUM FOR JUSTICE FOR KELVIN BALOYI AND END TO SECURITISATION

University of Johannesburg students, academic and non-academic staff, and the general public, are gatheredhere today to call for Justice for Kelvin Baloyi, a 21-year-old student from Mozambique who was shot and killed by a private security officer at an accredited off-campus accommodation in Rissik street called ‘The Yards’. The University of Johannesburg has washed its hands off of this tragedy, as has African Housing Company, the management of the off-campus accommodation. The private security officer remains anonymous with no institution claiming to have known him.

This tragedy is directly a product of the lack of accountability on the part of UJ management and especially the VC Ihron van Rensburg for the general safety, wellbeing and respect for the rights of the University community as a whole. Both the private housing company and UJ management are accountable for the tragic death of Kelvin Baloyi. It is the corporatisation of higher education which has fed the growth of profit oriented service providers with no interest in the rights and wellbeing of students. This would not have happened if we had a decolonised and decommodified higher education.

Kelvin Baloyi was not the first to die due to the negligence of UJ Management.

We also remember A B Championaire who also died this year due to the lack of a first aid kit and a dysfunctional lift at DFC campus when he suffered an asthma attack. There are other students who have lost their lives this year and we are saying Kelvin Baloyi is the last!

When students and workers made the call for free decolonised education and an end to outsourcing, the response from the University has been violent. UJ campuses, especially Auckland Park Kingsway campus, have been effectively militarised by an army of anonymous private security officers operating under direct instructions from UJ Management, and ultimately the VC Rensburg.

It is in this context of securitisation that top down efforts coordinated by the authorities have been directed at appropriating and limiting thinking around decolonisation by directing it from above. Students and workers have also been excluded from the Insourcing Task Team which has operated opaquely and with the added threat not to join students in any dialogue or pursuit of free decolonised education and insourcing.

In the meantime, death threats, rape, sexual harassment and battery at the hands of anonymous private security at UJ have gone without any reprimand.

No one has been held accountable even when 2 students were raped at DFC!

This is blatant approval of the dehumanisation of black bodies, with sexual violence especially, exposing how hollow it is for UJ management to attempt to appropriate the call for decolonisation.

A report published by the Right to Know campaign has specifically described UJ as operating like a ‘mini-police state’ where democratic rights are violated wantonly. Students, and all other dissenting voices have been effectively criminalised.

No more deaths of students at UJ!

Stop brutalisation and criminalisation of students at UJ

A general assembly, and open and transparent platform of engagement with all student formations, which must be livestreamed

A space for occupation as chosen by students and workers must be respected and not attacked as in previous occupation attempts.