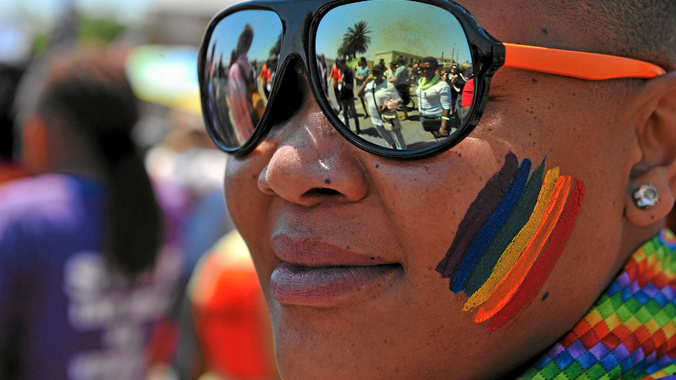 The first Johannesburg People’s Pride march took place on October 5 at Constitution Hill and the political nature of the event was clearly evident. Protest songs filled the air. People’s Pride linked many struggles to those for lesbian, gay, bisexual, transgender and intersex (LGBTI) rights – housing and other socioeconomic rights, and access to water and food.

People’s Pride emerges from the dissolution of the Johannesburg Gay Pride Festival Company after last year’s Pride parade. Members of the One in Nine campaign staged a protest on the route, a “die-in” that halted the parade, and demanded one minute of silence for the many LGBTI people who have been murdered because of their sexuality. The response from the Pride company organisers was racialised violence directed at the One in Nine protesters.

Then, in what seemed like a hissy fit, the company decided to shut itself down. It said the One in Nine intervention had “shifted the event from a low-risk event into a high-risk category, which would negatively impact on our operational structures and budgets going forward”.

One in Nine and the Forum for the Empowerment of Women called a public meeting to “discuss strategy for rejecting the commercialisation and depoliticisation of Jo’burg Pride in recent years, by boycotting the translation of Pride into a ‘gay parade’ and imagining ways forward for reclaiming our Pride”.

Two groups emerged – People’s Pride and Johannesburg Pride. The latter was to take place in September in Newtown, but the event has been postponed to October 26 in Sandton. Organiser Kaye Ally cited threats of violence, safety and crime issues as the reasons for the shift – odd, because there were no negative incidents during the People’s Pride march through Hillbrow and surrounds.

One in Nine organiser Kwezi Mbandazayo says People’s Pride is “our move to create an alternative to the commercialised and anti-poor agenda of commercialised Pride events. From its inception as an event that celebrated political struggle and claimed space for all members of LGBTI communities, Jo’burg Pride became a capitalist and consumerist gay parade that took place in a predominantly white and wealthy suburb, was sponsored by multinational corporations and businesses, and became an event that only the economically wealthy sections of LGBTI and queer communities were able to fully participate in.”

The term “pink money” or “pink currency” has been a way of asserting lesbian and gay economic power, but has also become a way of marketing Pride commercially.

“It was very clear that the pink economy had no significant answers to issues such as the hate crimes perpetuated against LGBTI people in South African townships,” says People’s Pride organiser Sekoetlane Jacob Phamodi. “Thus we felt it necessary to take direct action against a system that only benefits the wealthy elite in our society.”

It was evident last Saturday that, at this event, social justice was prioritised. It recognised that homophobia is intrinsic to the same system that puts marketing and money before equal rights and liberation for all LGBTI people.

Highlights of the day included the march through Hillbrow – along the original route of the first Pride march in 1990 – past Joubert Park and up to Constitution Hill again, with the crowd ululating and singing protest songs, to the dismay of some onlookers. The voice on the loud-hailer called: “Whose streets?” to be met with the resounding answer: “Our streets!”

Most poignant was the guard of honour for murdered LGBTI individuals, with their photos displayed on poles held high by organisers. The travesty of human rights represented by these many deaths and the problem of homophobia were really driven home as the parade silently passed through the guard of honour. Tears streamed down many people’s faces.

After the march, the crowd danced and sang, then settled into the venue for a joyous celebration. Bev Ditsie, one of the leaders of the first Pride in 1990, said to me: “Today is so awesome that even my goose bumps have goose bumps!”

And Phamodi said proudly: “We did this in a short space of time with the support of friends and a few benefactors – and no corporate funding. And look at how it turned out. It truly belongs to the people.”

Gillian Schutte is a writer, filmmaker, activist and founder of Media for Justice (www.mediaforjustice.net)