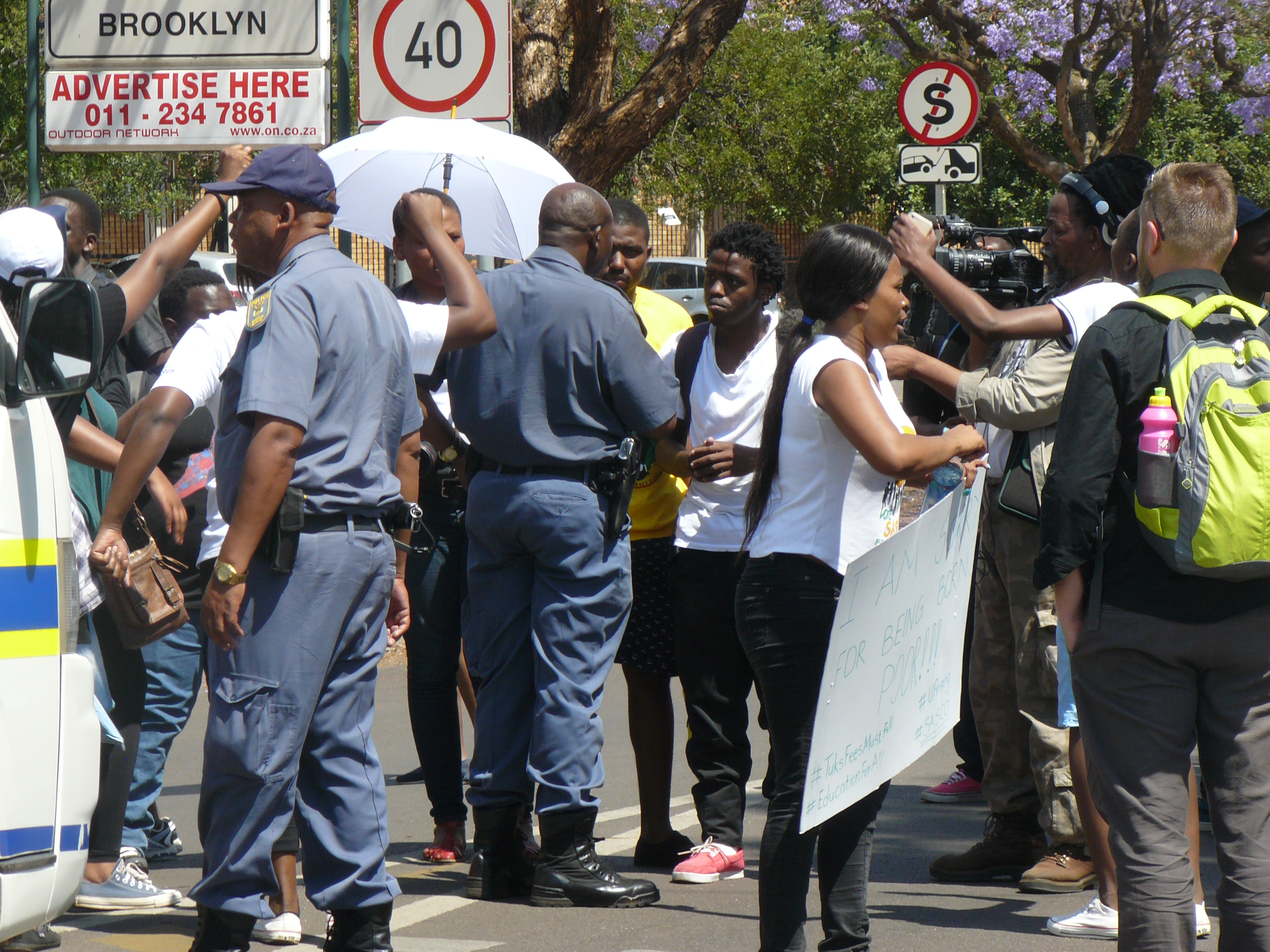 This narrative based on “shadowy international elements and movements” who were blamed for the unrest in the platinum belt a few years back is now being re-employed by the ANC to explain away the basis for the student uprisings.

In an excerpt from the NEC report released by the ANC on 30 November this year, they outlined their concerns about the early signs of counter-revolution that have “been identified” in the recent student uprisings.

Signs of this so-called counter-revolution includes targeting the state and state institutions, particularly the attempt to storm Parliament and Union Buildings when the government was amenable to engagement, as well as the singing of slogans about regime change when issues were being addressed.

The NEC report also claims that foreign funding is being channeled to various student accounts in a number of campuses and that provocation of police into confrontation was indicative of the pronounced desire to trigger a massacre, “another Marikana”.

In conclusion the NEC states, “in view of the above there was agreement that the people of South Africa should be more vigilant and appreciate that the broader threats of counter-revolution beyond the university campuses, as witnessed in other countries, are a reality of the day. The killing of police is part of the programme to undermine the state.

The NEC appealed to all South Africans to support the police and encourage them to act decisively in instances of anarchy and blatant undermining of the state and its institutions. Police must be able to ensure the maximum safety and security of the citizens at all time.”

While the ANC has constructed a storyline in which they are cast as the victims of foreign forces and anarchists intent on destabilising a liberation movement, it is they who are disseminating an official anti-revolutionary denunciation that is dangerous and disingenuous. This narrative aims to discredit the basis for the student uprisings though we are aware that these uprisings are firmly based in issues of lack of transformation, ubiquitous white supremacy and the corporatisation of universities, along with exorbitant fees that are inaccessible to anyone but the wealthy.

The revolutionary student movement is one that seeks to hold government accountable to its 1994 promise of free education. It demands that government do something about the pervasive racism and whitism on South African campuses that still sees a majority of white men in positions of power and reveals exceedingly low quotas of black academics. University worker’s plights are also placed on the agenda in the call for more rights for cleaners and staff as well as the in-sourcing their services.

The call for these rights are rooted in South African history as well as in current epoch that sees the ANC government neglecting promises made to the majority of people of this land. It is the call for the life of dignity and equal opportunity that is promised in the constitution but mostly out of reach for the working class and increasingly, the lower middle class in South Africa.

All of this discontent is culminated in the call of #FeesMustFall as children of the very people who are pushed onto the economic margins, or forced to live in the tyranny of white privilege, feel this injustice acutely and on a daily basis. This is the reality that gives rise to insurrection and explosive anger. It is rooted in people’s lived-experience and the blatant inequalities forced upon them by a neoliberal system.

Yet it is this authentic call for government accountability and delivery to the people of South Africa that is being whitewashed by the ANC government as they blame the insurrection on foreign forces that, apparently, have a vested interest in the overthrowing of the ANC liberation movement.

This narrowly constructed lens is doubly ominous as it is being used not only to diminish and criminalise the student’s real grievances, but also to silence activists and media workers who are sympathetic to the students. By naming them ‘foreign forces’ and using language that implies some form of terrorism, they seek to criminalise all those in solidarity with people’s struggles and shut down open and fair reportage of protests and uprisings told in the voices of those who experience this reality.

Though these accusations are made officially, when Mantashe speaks of foreign forces, anarchists and instigators ‘embedded’ in the student protest, he does not back up these statements with tangible evidence. On doing research I could find no information as to who these foreign forces or anarchists were, how much money has been transferred into which accounts or when exactly students were in possession of guns and whether they actually planned to kill police officers.

Conjectures and rumours that allude to disgruntled ex-political prisoners, social justice activists, online justice platforms and individuals abound. This is an underhand intimidation tactic in itself and highly improper.

Says one legal expert in a social media conversation, “Intelligence Agencies are obliged to divulge a publicly claimed governmental allegation’s authenticity since the Constitution became South Africa’s legal benchmark. Any such claim left unsubstantiated publicly, can only be seen as political propaganda and the perpetuation of hate and dissent designed to undermine the citizenship’s solidarity with just causes.”

Instead what we have are tenuous insinuations implying that there are evil forces amassing against the ANC Liberation movement. Mantashe had called these forces counter-revolutionary as if these are right wing potencies incongruously supporting the revolutionary call for transformation, service delivery and corporate accountability.

When Mantashe blames the students for the heinous violence we have witnessed over the last few months by the SAPS, campus security and private security officers against the students, and when he speaks of the intent to” kill police officers” in the same breath as the student uprisings, you can be sure that this is the basis for a propaganda campaign designed to demonise and deligitimise the students and their supporters and cast them as criminals. It is clear that the objective is to undermine the student collective and cast fear and loathing into the hearts and minds of the general public.

This is chillingly reminiscent of state collusion with conservative media in 2012 in which they criminalised the Marikana strikers in order to validate the state sanctioned brutality used against them in the tragic Marikana Massacre.

We can only shudder at what this means for the continuation of the student uprisings around the fees and other issues, next year. Thus far none of the student demands have been met and there is no talk of the protests coming to an end until they are.

But the fire of insurrection has begun and seemingly, there is nothing that will stop the rising of a unified youthful revolutionary force that has been ignited in a nationwide call for justice and equality for all.