HomeArticlesThe Persistence of Systemic Violence against Women – 16 Days of Activism 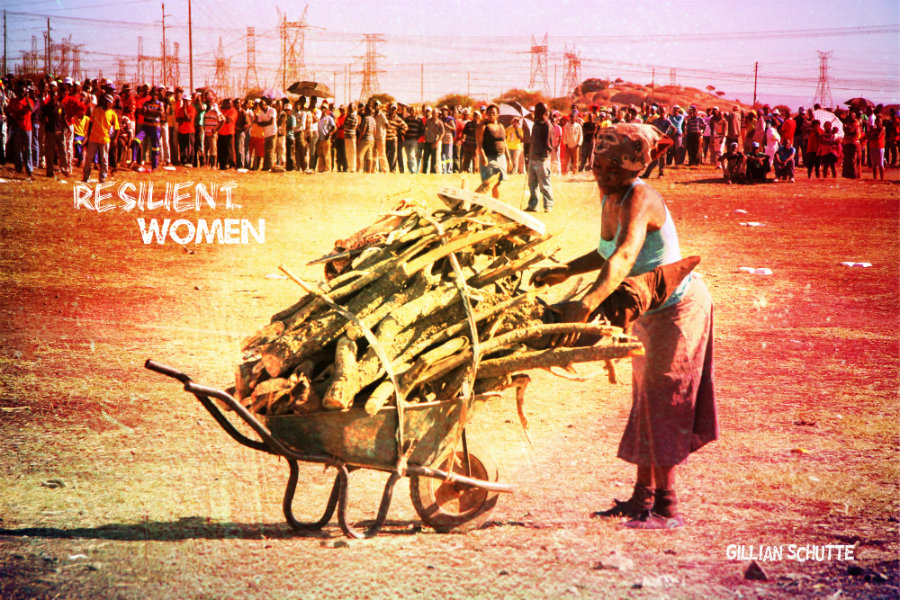 Article and Photo By: Gillian Schutte

Sixteen days of Activism for No Volence against Women and Children is upon us again this year. As usual it will come and go but very little will change for women and children in South Africa. The middle class will be a little more aware of the heinous gender-based violence statistics that haunt our country.  A few expensive awareness raising events will happen in economically marginalised communities and middle class spaces. Women’s resolve and hope will be raised again, but, as with most rights based initiatives that are driven by the neoliberal government, the donor funded NGO sector and the corporate sector, this will have little real impact on women living below the bread belt in South Africa.

Violence towards poor communities is intrinsic to neoliberal capitalism, and it is women who are most violated by a dispensation that favours profits before people. It is they who carry the biggest social burden and are rendered the most vulnerable.  Effective eradication of gender-based violence in a neoliberal capitalist system can only be an incongruity.

This system itself robs women of their rights by creating the very social conditions that make them vulnerable to the abuses that 16 days of activism seeks to shed light on. Until we have a developmental state that provides ample safety nets for its citizens and redistributes wealth, we will always have  excessive rates of women abuse.

Violence against women exists at all levels of society and must be tackled – but the focus on systemic violence must not be lost in this call. Systemic violence is persistent, gender-based and brutal and economically marginalised women are its victims.

Women who exist outside of the capitalist economy are the most violated people in our society. It is they who carry the burden of lack of service delivery, lack of sanitation, lack of food security and lack of personal safety. It is resource deprived women who are left with the problem of how to feed their children when there is no income; of where to dispose of their family’s human waste where there is no sanitation and how to keep a family safe in a shack that offers no security. It is they who are left with the numerous health  problems that are rife in areas that have no services and where children suffer with skin rashes and sores as a result of playing on land that doubles up as burial grounds for human faeces. It is they who are forced to navigate the reality of filthy temporary toilets that are often not adequately maintained by the municipality, are often more than 50 meters away from their front door, and mostly too dangerous to use because of crime and rape.

It is economically disenfranchised women who make their way to lowly paid jobs and leave their children with unemployed neighbours or a boyfriend. Sometimes they have no choice but to leave their children unattended. Many women have voiced their fear that their children are vulnerable to abuse or rape under these conditions. Some women have testified to their boyfriends making their teenage children surrogate wives as they are too exhausted to engage in sexual activity after long hours at work, or because they are absent and this leaves their daughters vulnerable to sexual predators.

These are the women who deal with the scourge of rats and cockroaches that nibble at baby’s extremities if left unattended – or compete with them for their food. It is they who are offered no security by the local police when they arrive home late on a taxi and have to walk over unlit bridges or down lonely roads to get home, vulnerable to being mugged on the way. It is they who walk long distances to find a clean source of water for their family’s hygienic needs and who eke out money to try and pay for school or university fees with the hope that their children can break this cycle of poverty.

As if this is not enough the state expects them to pay exorbitant electricity and water accounts with salaries or grants that can barely feed them and their children.

The life of an economically disenfranchised woman in South Africa is the moral barometer of this land. It tells us all we need to know about how inaccessible ‘human rights’ are to those who do not have money and status.

In this democracy which boasts the most advanced constitution in the world the majority of citizens have literally become disposable because of the current economic framework.

Neoliberal capitalism has, in fact, resulted in South Africa ranking the second highest Gini coefficient in the world. While the wealthy have gotten wealthier and a black middle class has expanded over two decades, 53% of our population, made up of mostly black South Africans, are now living below the breadline.

There has been little attempt to bring the poor into the economy and even workers remain caught in a cycle of dire poverty. This means that more than half the population, including the working class, have lost the basic right to exist with dignity. In the meantime the state and its corporate masters becomes more draconian and brutal towards the poor.

This system continuously works to make already marginalised people more invisible, more muted, more policed, disciplined and dehumanised. It is their voices that are silenced, their bodies that are shot at or shut away and dumped miles from areas where resourced people live and where they could possibly find work.

Instead they have to eke out a living on small social grants, which the state holds up as proof of their “rights-based” democratic governance.

But these grants are simply not enough to sustain people and certainly do not keep up with the inflation. Basic foodstuffs have become expensive for working people. How much harder this must be for the poor and unemployed of our land when even bread and mealie meal are increasingly inaccessible.

The reality is that half of our population is dying a slow death from inadequate access to nutrition and we, the middle class, turn a blind eye to this.

We have to ask why, over 16 days of non-violence, we do not talk about this on going systemic violence against resource-deprived women? How do we not make the connection between this systemic violence and the soaring phenomenon of domestic violence, rape and abuse of women?

Instead we focus on the perpetrator – as if these angry, dispossessed and emasculated men are the sole violence women are up against. This focus is not going to make much difference to the daily lives of women who are up against multiple violence’s from multiple sources. Until we deal with the social issues that give rise to violence all we can hope to do is lobby the system to treat violence victims with the care and integrity they deserve.

They live in a system that gives rise to countless social uprisings and protests around the countless problems rooted in their communities. These uprisings are often led by women and are an explosion of frustration around shoddy or non-existent service delivery. Street action happens after months of one-sided negotiation in which their complaints are often ignored.  These protests do not happen in a vacuum of the entire spectrum of what it means to be human. Most times the anger that erupts in these upheavals is to do with existence itself — and the indomitable human spirit that refuses the untenable conditions and lived reality forced upon them.

Community protests are in direct response to what Left economist Patrick Bond has referred to as “the war against the poor” engaged in by both state and the corporate class. So-called violent protests speak volumes about the human spirit’s refusal to be perceived of and treated like human waste — dumped in RDP housing wastelands and cut off from basic services and employment.

For the majority of women in South Africa it becomes mere lip service when the government, NGO and corporate sector run expensive campaigns that speak of nonviolence against women for 16 days of the year. The systemic violence of a neoliberal system is persistent and is directly connected to the obscene opulence of the wealthy corporate class. It is as a direct result of macro economic policies that favour foreign direct investment and multinational rights before people’s rights and consistently puts profits before people.

That these multinationals are polluting the air and land and communities, exploiting the resources and enforcing cheap labour, seems to mean little to leaders that have, finally, become the elite themselves. It speaks of a state that seems to not care that the poor do not benefit from the so-called trickle-down effect of a neoliberal capitalist economy. Neither do they benefit from a Constitution that promises to protect all citizens of South Africa.

It is economically disenfranchised women who suffer the most under this rule.

16 Days of Activism For No Violence Against Women and Children in South Africa would do better as a movement that demands a systemic change from neoliberal capitalism to one that promises what the Freedom Charter promised way back in 1955 – equality for all – all the time. Only then will we begin to make inroads into improving the lives and personal safety of all women in South Africa.

Gillian Schutte is a writer, filmmaker and social justice activist. This article is as a result of many interviews conducted with women in vulnerable communities via a Media for Justice Project – The anatomy of Struggle, The Marikana Files,  Voices from Twenty Years of Democracy.