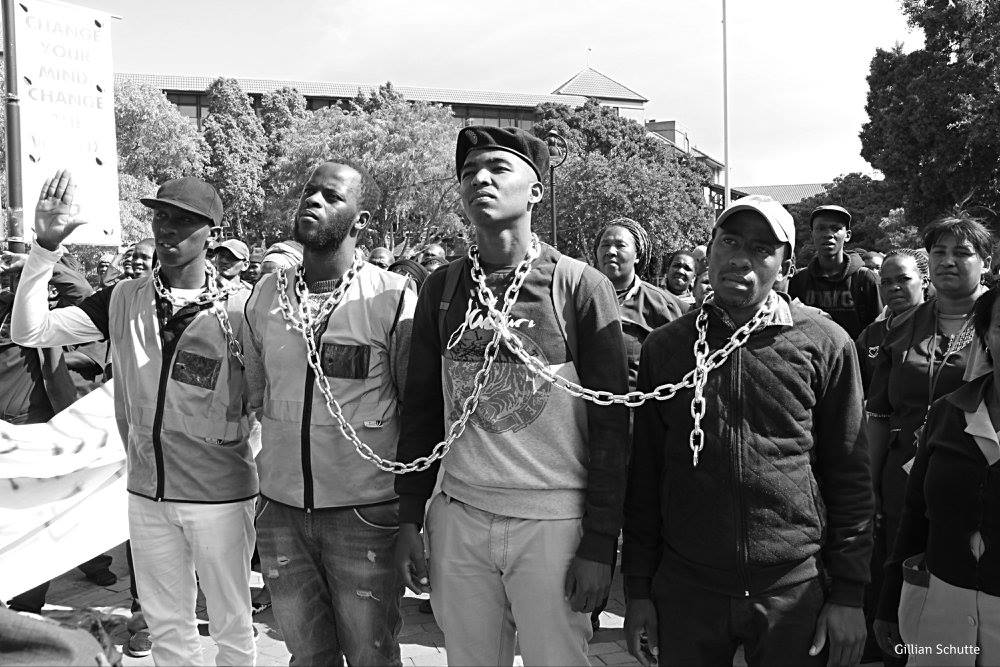 The following critique is a specific engagement with a recent article by Ebrahim Fakir and Aayesha J. Soni that appeared in The Daily Vox on February 20th 2017. More generally, however, it concerns a wider journalistic bias in covering the current #FeesMustFall protests.

In their recent article, Free Higher Education Is Not a Universal Human Right, Fakir and Soni make a series of critiques against #FeesMustFall (FMF) and the Fallist movement. There is – to be sure – no problem with taking this position, unless of course one were claiming to be engaging in ‘objective journalism’, rather than generating (ultimately authorless) opinion pieces that posit virtually no possibility of debate or accountability. In using metaphorical language that depicts Fallists as being ‘spectres that loom large’ or having ‘ranks that are fracturing’, Fakir and Soni seem to be describing an amorphous, demonic horde in a military campaign against civilization, rather than a student protest movement. At least we can dispense with the myth of objectivity (which will surely serve as a defense against subsequent critique).

Their opening critique against FMF is bizarrely against its novelty:

“It is worth revisiting some key debates that #FeesMustFall and the fallists…have sparked over the last year. The first is that the #FeesMustFall movement has sparked something new, and worse still, that these protests are leading to something new.”

Before addressing why ‘something new’ is even at issue, however, the authors inexplicably compare FMF to marginalized community protests, which have largely been neglected by the mainstream South African media. Here, the Fallists are sanctimoniously accused of making “particularist, special interest [claims], of benefit directly to them”, despite the fact that the media have chosen to neglect other protests. Here, the fundamental difference between FMF and other neglected interests remains unaddressed by Fakir and Soni – that the Fallist protest directly impacts elitist South Africa, while other, marginal forms of protest can largely be ignored.

With regard to these critiques, I do not know any Fallists who have claimed anything ‘new’ about FMF’s demands. Instead their concerns have centered on a promise made in the Freedom Charter, which was adopted in 1955, and enshrined access to free education as a human right. The date is important, since this foundational document in the struggle against apartheid was adopted in the same year as the Bandung Asia-Africa conference in Indonesia, an event where the decolonization of a still exploitative global political and economic order was proposed among newly decolonized and decolonizing nations. Largely, the FMF protests do not so much enshrine the Freedom Charter as they contest the failure of its promises. Instead they are calling out the tandem escalation of fees and economic racism that continues to further marginalize the already marginalized within a compromised, increasingly ‘free’ market educational model.

Furthermore, Fallists’ appeal to the Freedom Charter has, in fact, drawn popular support among the marginal communities whom Fakir and Soni have further marginalized in their writing. Thus, the Fallists’ claims appear to be neither ‘particularist’ nor ‘new’ – and that seems to be very much the point. In fact, the wider and perhaps more relevant provocation by FMF reveals itself in Fakir and Soni’s assumption of the ‘impossibility’ of free education in a ‘market economy’. Here, the authors naively take the economic status quo for granted in making what they imagine to be their own damning critique of Fallists’ economic ignorance – stopping just short of suggesting that the students do not in fact deserve the privilege of an education.

To be sure, if we continue to assume western economics as our default – an addictive system already proven to have failed, given how the endless accumulation and labor exploitation it necessitates will surely drive us to extinction – then free education certainly is impossible. However, this is ultimately where the stakes FMF’s radical critique lie, in that it opposes a bloated, top-heavy symptom of this unsustainability: South Africa’s knowledge industry (and yes it is an industry) and its dependency on, and perpetuation of, a wider debt-corruption complex: the more corruption extends into every theatre of commerce and governance, the more social debt is needed to sustain it, which ultimately leads to more corruption, more debt, and a widening gap between those who exploit these conditions and those who carry the burden of debt – usually carried on the shoulders of an aspirational (yet far from it) middle class teetering on the edge of financial oblivion because of unassailable debt. This is a center that should not, and cannot hold.

This is symptomatic of a neoliberal state and its organs, of which the university is certainly one among many. The university, however, becomes a key site of contestation precisely because, out of all of these organs, its student body and their governance are located at the intersection of privilege and inequality. It is for this reason that the university becomes such a visible site of protest and debate. This is what makes the FMF movement so dangerous and unsettling to already established interests. That it embarrasses them precisely because it reveals the contours of this debt-corruption complex in the very place meant to legitimate privilege: the elite university as validator of entitlement.

This kind of exploitation is certainly not only a threat to knowledge production in South Africa, but manifests itself globally in other guises, as all the universities of the third and developing world continue to chase the nightmare of American educational neoliberalization. However, if one were to take even a casual glace at the American educational system, the same fundamental flaws become apparent very quickly, as countless American scholars have observed. Here, my injunction to Fakir and Soni (whom I hope are reading) is this: The fantasy of enlightenment rationality you are enshrining through you’re a priori endorsement of a highly contested economic outlook, is the very root of a persistent liberal delusion that will destroy us all. Here, I would implore media outlets more generally to consider your critiques more carefully, and not window-dress them as objective journalism.

Jay Schutte is a PhD Candidate in Linguistic Anthropology at the University of Chicago. His work focuses on the political economy of language and the semiotics of intersectionality in China-Africa encounters.
Here is also a link to his webpage at UChicago’s MAPSS program where I he is a preceptor: https://mapss.uchicago.edu/directory/jay-schutte