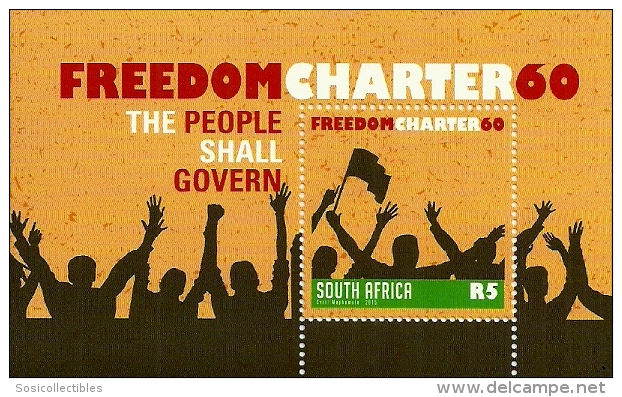 At the beginning of 2015, ANC declared it is the year of the Freedom Charter.

Now the year is ending without the ANC having acted to uphold the Freedom Charter.

In South Africa there has been no revolution after all the years that the ANC promised to fulfil the freedom charter in the spirit of humanitarianism. In 1955, a congress of the people gathered at Kliptown and compiled the document that appeared to be the blueprint of the future South Africa. This is the Freedom Charter.

South Africa has emerged as the most unequal society, despite having this principled document. The gap between the rich and poor has rapidly widened since the ANC took over in 1994. The steadfast escalating rate of unemployment is an indication of this.

The Freedom Charter was the poetic statement of the pro-self-government and social-democratic demands, and it emphasizes the transfer of the wealth (privilege) and power from the white minority to the population as whole, in order to benefit all South Africans, both black and white.

It is necessary for the ANC to make concessions to the people of South Africa. The rise of the Social movement formations, such as Abahlali baseMjondolo, is the unveiling of the fact that South Africans have had enough of the ANC’s model of fulfilling the Freedom Charter.

However, I am not disputing that the ANC had improved the lives of many people Some of the citizens of South Africa enjoy free basic and secondary education, which the Freedom Charter Stated that the doors of education and culture should be open to all.

South Africans today can say that most black people have made the transition, by shifting from township to urban areas, into greater prosperity. The reality is that urbanisation might be taking place at super-sonic speed, but slums, squatter camps and foreign migration increase every day.

Statistics South Africa delivered in 2011 a Census to the president of South Africa. This succinctly highlighted that South Africa has more than 1.2 million informal dwellings, which include squatter camps. It is noted that Gauteng has many squatter camps, totalling 434, 075; followed by the Western Cape totalling 191, 668; plus a further 712, 956 ‘backyard’ shacks around the country.

I deliberately sparked off this argument because the Freedom Charter promised the people of South Africa decent houses. The Freedom Charter argues that “there shall be houses, security and comfort”. On the contrary, during last year 2014, the Minister of Human Settlements, Lindiwe Sisulu, stated that will be no free housing for any citizen under 40 years of age.

Most people understand the poor to be an homogenous group. They point out that poor are either lazy or extremely self-sufficient. In the sense it is not necessary for the state to intervene.

The classical argument, by the Minister of Human Settlements, is that people under the age of 40 did not lose out under apartheid. However, they are not eligible to get free houses from government.

South Africa is twenty years into democracy with 60 per cent of the youth unemployed, and 11 million South Africans surviving on R250 per month. However. the youth is still denied free houses by the Minister of Human Settlements.

The ANC led government operates on neo-liberal policies that impinge on the poor most. The ANC has been promising rural development since 1999. In reality, the people of Limpopo in the countryside, such as Nwa’mankena village, collect contaminated water from the rivers and dams. Many households live without electricity.

The ANC adopted a NDP (National Development Plan), which is the product of elite round-table ‘deliberations.’ NDP was not a product of the ANC’s internal processes such as a resolution from the National General Council.

Recently, the state of high education was in the public domain. This followed the universities’ proposals that the fees be raised above the inflation rate. This sparked off student radicalism with massive student protests at the locus of decision making institutions. It started at parliament and concluded at the Union Buildings. This occurred because the ANC ignored the Freedom Charter.

The ANC has replaced the Freedom Charter, and the National Democratic Revolution with NDP. The failure of the ANC to implement the Freedom Charter, such as transferring the wealth of the country to the majority of the people, has resulted in the current massive retrenchment in the mining sector and textile industries.