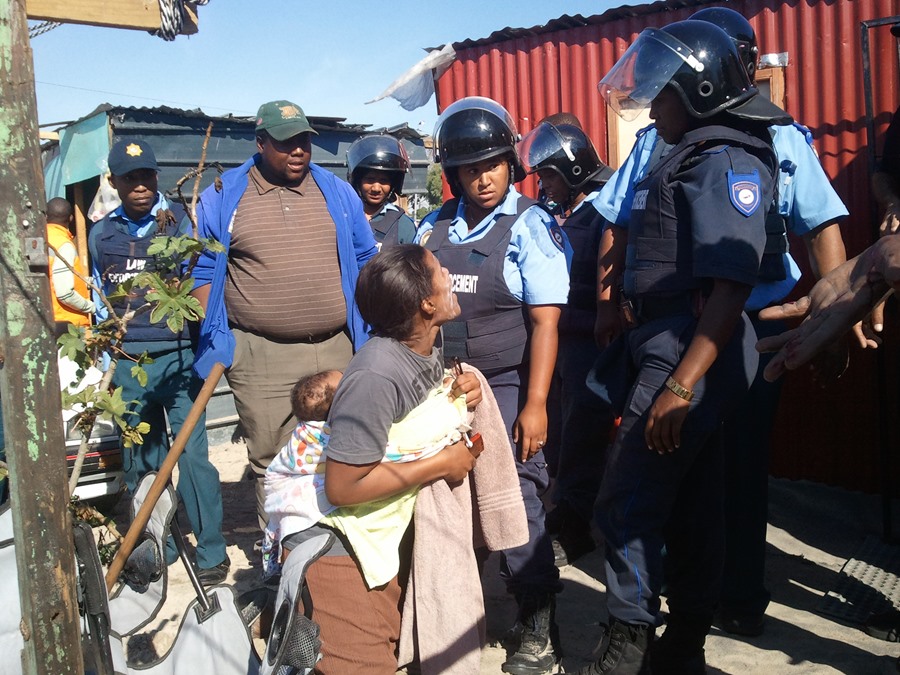 As academics, journalists, social commentators and activists we have a sense that we know the poor. We are outraged by poverty and inequality and advocate for equity and a life of dignity for all. We look for ways to bring the voices of the poor into the public debate and ask questions around how we can get democracy to work for the poor. But few of us have even an inkling of the full spectrum of what it means to be poor.

We live in one of the most unequal societies in the world. Poverty is all around us and it is strongly concurrent with differences in race. Whites remain in the richest economic category with Indians and coloureds following.

Besides the burgeoning black middle class, and the small black elite, mostly in South Africa to be born black means to live a life of quiet desperation with little hope of ever finding a job. Pensioners are forced to support grandchildren on minuscule pensions that hardly cover their own expenses. While the majority of the poor are black there are small pockets of desperately poor whites and larger pockets of minority group poverty.

Despite the countries immense mineral wealth, the gap between rich and poor is wider than ever — 18 million live on less R11 a day. One in every two young South Africans is out of work. As a result of this dire poverty and lack of employment violence is commonplace and the most vulnerable in our society become even more defenseless. The great surge of hope that swept our country in 1994 when Mandela came into power has sadly dissipated after his death. For millions of South Africans his vision of freedom, equality and justice has been seen as wasted away by his own facilitation of the neoliberal economic policies that replaced the Freedom Charter.

Neoliberalism is a term that is widely bandied about in a vacuum of understanding — but the effects of it can be seen in the growing chasm between the rich and the poor. In a nutshell, neoliberalism is an economic set of rules that liberates “free enterprise” or private enterprise from any regulations imposed by government — often resulting in dire social damage. It means opening up the market to international trade and investment and reducing the bargaining powers of workers by encouraging deunionisation and eliminating many workers rights. It means becoming capital-intensive and reducing a workforce to casual labour. Price controls are lessened and freedom is granted to capital goods and services.

The premise is that an unregulated market is the best way to increase economic growth as the wealth trickles down to the poor — but this trickle-down effect does not happen and the poor grow poorer.

All in all, neoliberalism works against the poor and increasingly the middle class too as public expenditure for social services are cut, reducing the safety net for citizens, but especially the poor who are reliant on this safety net for their very survival. Privatising public works also pushes prices for services such as electricity and water into brackets that essentially exclude the poor from basic services.

The ideological discourse that upholds this neoliberal system is a liberal individualistic one that speaks of personal effort — pressuring the poorest people in a society to find solutions to their lack of healthcare, education and social security all by themselves — then blaming them, if they fail, as “lazy”. (For further reading:  http://www.corpwatch.org/article.php?id=376)

Those who push this liberal discourse have very little knowledge of, or interest in what it means to be poor. Over the years we have spoken to many people about their poverty and have compiled a list of experiences of poverty as told to us by people living this reality.

To be poor is to lack decent shelter, nutritious food and adequate clothing. It is to be sick and not have access to healthcare facilities.

To be poor is to be hungry most of the time and to watch your children or grandchildren cry and writhe from the pain of hunger while being powerless to do anything about their agony as they try to sleep on empty stomachs. It means seeing your kids off to school knowing they have empty bellys. It means not knowing how your children will stay alive if anything happens to you. To be poor is to often have little control over adverse external events that affect them directly. When they rise up to defend themselves in protest action they are often treated inhumanely by institutions of state and society and excluded from voice and power in those institutions.  The state and corporates make use of security companies and the police force to oppress the poor through brutality.

To be poor is to live with toothache and then having to pull your own teeth out to relieve the pain. It is to live without necessities such as toilet paper and sanitary pads. It means young girls have to miss school when menstruating.

To be poor also means to have no space for dreams and aspirations, as survival is paramount. It means watching others enjoy life and wonder what you did to deserve your life of constant suffering, hunger and perpetual deprivation.

To be poor is to worry whether your newborn baby will be gnawed at by rats in an mjondola in Alex and staying awake all night to make sure your baby is safe.

To be poor is to know that other people think you are lazy and dirty because you are forced to scavenge on rubbish dumps for your next meal.

To be poor is to most often be spoken to like a child or be treated rudely when doing important autonomous tasks such as going to get medication at a public hospital. It is to be treated badly in banks and municipalities when you enquire about inflated bills. It is to often be fobbed off and given the wrong information when you desperately need legal help.  It is to be spoken to impatiently at places meant to be in service to citizens.

In fact recent studies by the World Health Organisation have shown that poverty has long-lasting effects on the health and general wellness of humans, symptoms that can be difficult to reverse. The costs of being poor are high in terms of the diseases that poverty gives rise to.

The reasons for the poor health of impoverished communities are obvious when entering into an informal settlement or poor neighbourhood. Most often these environments are dirty and there is a stench in the air because of lack of sanitation and services — amenities that are meant to be provided by the municipality. Housing is also shoddy and clean water and toilets are often just not available forcing people to walk for kilometres to fetch water from taps.

Access to healthy food is also a major problem for the poor. Big chain stores are often not within walking distance and poor people are then forced to spend their money on transport, which adds an extra strain on their tiny budgets. If they want to buy at smaller spaza shops they often have to pay inflated costs. Also spaza shops or takeaways often and do not sell healthy and fresh foods, so they end up eating food high in fat, sodium and sugar. All of this contributes to illnesses such as diabetes and high blood pressure.

It is a known fact that the poor are very often moved into areas that are the dumping grounds for industrial pollution and waste. Thus to be poor means to live in regions with dangerously toxic air quality and polluted water. Impoverished communities have historically been placed downwind, downstream and adjacent to big industry as a source of readily available cheap labour. This means respiratory illness is rife and families are forced to spend a large part of their salaries on asthma medication and nebulisers. Cancers such as leukaemia are also diseases that arise out of living in areas saturated with industrial pollutants.

Joblessness and low social grants create economic insecurity, which has devastating consequences for both physical and mental health. Economic inequality  and instability takes a massive toll on mental health. Recent studies have shown that economic insecurity creates stress levels on a par with those experienced by people experiencing warfare. New research has shown that the mental stress of being poor is a major reason that low-income people are more likely to have high blood pressure, cholesterol and become obese or diabetic, since long-term stress creates hormones that compromise the immune system and promote weight gain.

To be poor is also to live with feelings of worthlessness, anger and frustration with few public outlets to vent these feelings. The media often does not represent the voices of the poor and are more likely take the side of business instead. Coupled with non-caring government officials and police that often use brutality on poor people, these multilayers of stress create a pressure-cooker situation that can explode at any given transgression that “breaks the camel’s back”. The high incidents of domestic abuse, rape, robbery and murder, which inevitably manifest as social problems in poor areas, adds to the anger and frustration of citizens trying to lead a normal life in abnormal conditions. This can lead to people collectively taking the law into their own hands and meting out justice in a manner that appears brutal to those whose voices are heard and whose material, psychological and emotional needs are met due to their class.

Many times what people perceive as service-delivery protests are indeed coupled with outbreaks of utter frustration and desperation at being squeezed between capital greed and their own basic needs as they are pushed deeper and deeper into the quagmire of poverty. What the media report on as service-delivery protests are often poor people collectively calling out to be heard, to be recognised as human and to be treated with dignity and to be allowed to exist as human.

Indeed one of the consequences of neoliberal capitalism and poverty is the escalating incidence of social protests in South Africa. Researcher Jean Comaroff writes, that these social movements “in the wake of the growing spectre of [human] disposability” signify a struggle for “the basic right to exist” although it is often expressed differently in terms of a demand to basic services, resistance against displacement and disconnection from water or electricity”.

To be poor also means that premature death is always imminent. Many die from ill-health and hunger or face the possibility of dying in a protest as corporatised state uses it police and security arms to quash uprisings often using undue force. In today’s world the growing private sector is likely to let their private security armies onto people protesting and the results are often brutal.  Ten protestors were killed at the beginning of 2014 for simply rising up to claim their basic rights to water. This is nothing less than a war against the poor and they have very little state and private infrastructure to support their perspective and their right to live a normal life.

South Africa has become a neoliberal corporatist state that believes all of society should be structured in such a way as to serve the interests of monopoly capital at the expense of the people. This places the poor under more and more stress. The average lifespan for those people living under these desperate conditions is 44 years of age. Studies show that the average life expectancy of a black South African is 50 years — showing a large discrepancy in life expectancy and mortality rates between black people and those of white or coloured groups. That is more or less the same as the lifespan of peasants in the feudal medieval days and it is no wonder since 50% of our population continue to live in forced medieval conditions.