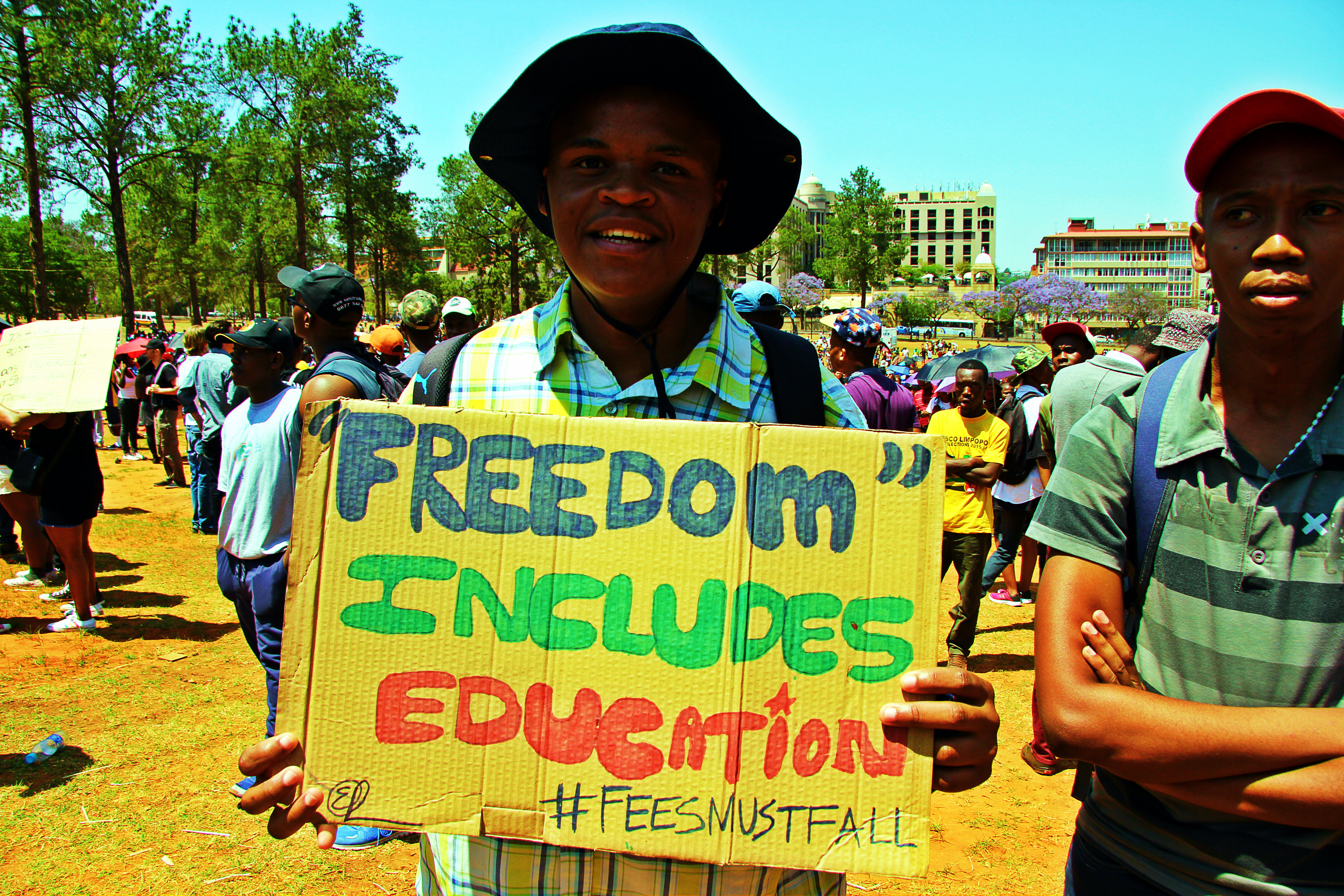 Share on FacebookShare on Twitter
By: Tracey Lomax
Last year, when the Students marched on the Union Buildings and brought even our over-bloated and arrogant executive to its knees, albeit temporarily, they were lauded by all South Africans as heroes, as fighters for justice and for freedom. The Zuma Must Fall campaign, largely supported by white middle class South Africans, pointed to the students as examples of how to fight against corruption and empty promises.Then, the government announced its freeze on fee increases, and all of a sudden, the students were told that they had won, and we expected it to be business as usual.This shows how pitifully little most South Africans know about the Fees Must Fall (FMF) movement, and how unaware they are of how much black students are still being excluded from institutions of higher learning.1. Where did it start.

The FMF Movement goes back to even before the end of Apartheid.  At universities like Turfloop, UDW, Fort Hare, students have been protesting since the 80’s about financial exclusions.  It was only recently, when the previously “white” institutions joined the protests that they achieved mainstream attention.  The protests have always been met by government with violence, and the new government, despite the tenets of the Constitution which govern them the way they did not govern the Apartheid regime, are using the same tactics that De Klerk an his cronies did in the 80’s.

The FMF Movement expanded the focus of its campaign when the Rhodes Must Fall (RMF) movement gained traction at Rhodes and Stellenbosch.  The movement became about more than simply financial exclusion, but began to focus upon decolonisation of our higher learning institutions, which still paid tribute to some of our country’s most oppressive historical figures, like Rhodes and Kruger, figures whose statues still graced the walkways of campus, along which students who were the descendants of the people they oppressed had to walk.

The movement was joined by the workers last year, who had fought for years to end outsourcing of labour on campus.  These workers, who hailed from the same background as the student protesters, were joined by them, and the Universities were called upon to end the outsourcing of labour on campus.  This was a natural synergy, as the children of outsourced workers, who should, under university rules, have been entitled to free education, were excluded in the same way students were.

2.  What are financial exclusions?

University fees in this country can run to hundreds of thousands of rands.  Black students, who come from historically disadvantaged households, seldom have the financial means to meet these fees.  Not only that, but most black households have not built the generational wealth that their white counterparts have, and cannot access student loans in order to meet the burden.

NSFAS and bursaries do not go far enough to ensure that students can meet the demands of fees, residence fees, registration fees and the cost of books and stationery.  Moreover, for many students from rural areas, transportation costs are prohibitive.

What white students seldom realise is that many black students are also supporting their family at home, where parents are either absent, or unemployed.  This places an additional burden on students, who have to work, often more than one job, in order to send money home.

Students with outstanding fees cannot access their results through the year, and are not permitted to register for the following year, or to graduate.  This results in students having to take longer to finish their degree, or to take on part-time unskilled work when they have finished their degree, in order to save the money to pay the University, so that they can obtain their degree certificates.

3.  What does this mean for our university standards?

I hear over and over again the cry that making university free will result in a lowering of standards.  Nothing could be further from the truth and I would venture to say that making tertiary education free would raise our standards and the quality of our professional workforce, to such an extent that it would render BEE practically redundant far sooner than it would otherwise.  Let me explain:

3.2  It WOULD mean that the people who are competing for a place at university are no longer competing only against those with the financial means to attend.  Places would now available based solely on merit.  In the past, it was possible for a mediocre white student with means to take the place of a black student without the R3 000,00 registration fee (even if that student had a bursary, the registration fee for residence often excluded him or her).

3.3  It would mean that black students would be relieved of the necessity to work a plethora of jobs in order to support their families and pay for their studies.  When white people cry “but I worked my way through varsity”, what they mean is that they worked to pay for fuel, entertainment, beer.  When black students work, they are literally paying for food, books, and food for their families.  The work pressures are completely different which is why many female students turn to sex work in order to pay for their studies.

3.4  This would also mean that black students could focus on their studies.

3.5  If students do not have to take time off, because they cannot afford to register for a given year, they could finish their studies in the same time period as white students, which would mean that they are less of a burden on the state.

3.6  If students can obtain their degree certificates upon completion of their studies, and could enter the professional job market immediately, thereby contributing to the economy.

3.7 There is an existing report which indicates that free tertiary education is an achievable goal.

4.  So why don’t people support FMF to the same extent as last year?

The answer is always the same : Students are violent.  The students are denounced for setting fire to buses, for burning libraries and buildings, for disrupting rugby matches and lectures.

The problem with this answer is that it is simply not nuanced and overlooks the following:

4.1  Protest is always disruptive, by its nature.  Even a peaceful sit-in is disruptive.  Change seldom occurs without the incentive for it, and that incentive is often provided in the form of protest.

4.2  These issues are not new, and so the argument that the students are impatient, and should exercise restraint overlooks the more than twenty years that black people have been financially excluded from university and the four hundred years of oppression and exclusion that they have endured.

4.3  The students are being met with violence, no matter how non-violent their protests.  The universities have employed private security guards who have been recorded threatening students with rape, firing rubber bullets at the backs of retreating students, beating elderly female workers, locking students in rooms for hours, beating and kicking students.  The SAPS has been called upon to suppress even peaceful protests.  White students have been recorded beating up black students who were engaged in peaceful protests, only for the black students to be arrested and white students not.

It is not surprising, then, that the students would become increasingly more violent in their protests, when peaceful protest is met with violence.  Violence begets violence and the cycle continues.

We can condemn violence without writing off the struggle as  illegitimate.  If a struggle were to lose legitimacy if violence were used, we would have to write off most liberation struggles.

4.4  Nobody has been convicted of violence.  There have been a number of arrests made, charges have been laid, but there are no convictions.  As far as I am aware, there have been no guilty findings at disciplinary enquiries either.  In this country, there is a presumption of innocence and so, until a student or some students are found guilty of violence, we must presume them innocence.  Our constitution demands that of us.

4.5  There has been much talk of “third force” activity which is trying to derail and delegitimise the student protest.  As much as I hate to give credence to conspiracy theories, this is not a new technique in South Africa and, as stated above, in the absence of guilty findings against students, is as good an explanation for the violence as any.

Which brings me to the point of this post.

If we accept that the student movement has a legitimate aim (as most people do, even if they wonder how attainable that aim is), then there is no reason to believe that that aim is illegitimate because of accusations of violence / destruction of property.

If we accept that South Africa demands that every person has a right to the presumption of innocence, and a fair trial, there is no reason to claim that the movement is violent.  More particularly, if we are going to denounce violence, then we should also be denouncing the violence meted out by the universities and by white students in meeting student protests.  We cannot have it both ways.

If you agree with me so far, I implore you to become involved.  Here are ways you can do so, without being an active participant in protests:

1.  Join the Protest Observers Alliance (https://www.facebook.com/groups/1716039708609098/) and attend protests as an observer, to monitor, record and report back on what you see.  This group aims to compile a dossier of its observations at protests in South Africa in order to provide information to institutions like the Human Rights Commission, the Public Protector’s Office, the Constitutional Court, the Equality Court.  It is non-partisan and its function is simply to observe and, where necessary, to mobilise professionals who are needed – medics, trauma counselors, lawyers.

2.  If you are a professional, offer your assistance.  Last year, lawyers were falling over each other to offer assistance, this year, we are struggling to find lawyers willing to help.

3.  Read everything you can about the movement and keep an open mind.

4.  Engage with students in order to remain updated about events on campus, the general mood.

5.  Prevail upon Government to make good on its election promises of free education.

If you would like to become involved as a concerned citizen, please email tracey@accesstojustice.co.za or get hold of Equal Education or even some of the student leaders in the FMF movement.

Thank you for taking the time to read to the end.  Yours in peace.

Tracey Lomax is an attorney and activist with a commitment to upholding the ideals of the freedom charter as enshrined in our constitution.