HomeArticlesThe paradox of the #feesmustfall campaign 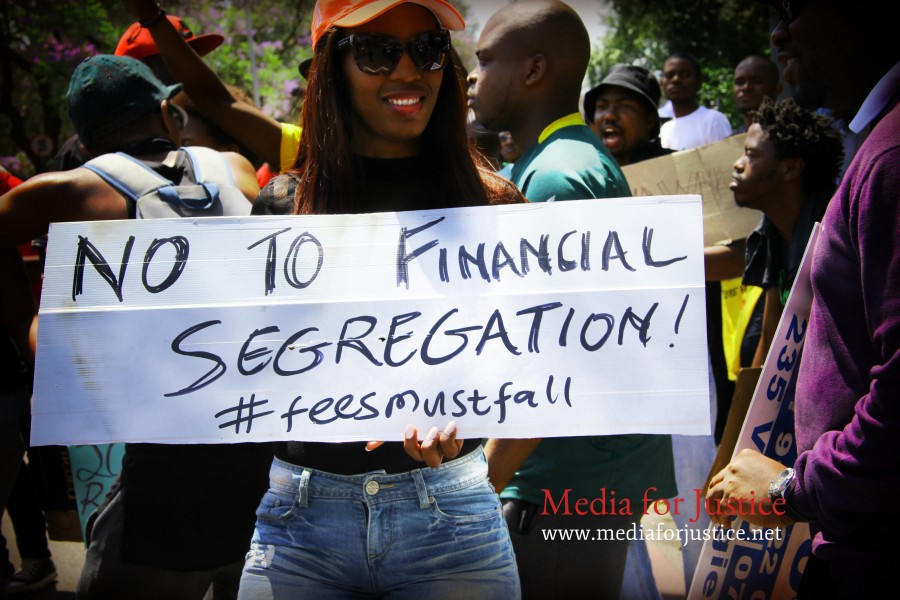 The #Feesmustfall is a great and glorious movement which emerged last year [2015] October which was more of concerned with the fee increment or lowering of tuition fees. The militancy and radicalism of students took the movement to the primay locus of  decision-making institutions, which was the first parliament, second Luthuli House [ANC headquarters] and concluded at Union Building.

The fees must fall movement put aside their political differences where they combined their political parties in their quest to abolish tuition fees. The movement gained the sheer amount of support from the society daily because it was in a real position of rectifying fundamental flaws in the educational terrain. In fact, the massage which the feesmustfall was sending to the government was that students can amend decisions emanating from the state.

The reality is that the authentic and original discoveries of this movement were Wits University which is a liberal University and hang-over from colonialism. The Feesmustfall movement gradually grew into a permanent movement following the government announcement of ‘no fee increment’. However, the movement failed to capture and address the social question in relation to poverty. Noting that University of Limpopo and Tshwane University of Technology changed the theme of movement from a context of lowing fees to a free education for all or complete abolition of tuition fees. The Wits University and the University of Pretoria succumbed at Union Building right after the president announced that will be no fee increment. Tshwane University and the University of Limpopo were disgruntled with Wits and U.P for delinking themselves from free education protest to the extent they threatened to burn Wits buses.

If the feesmustfall movement understood that they can serve as social forces in emancipating the poor, then it was not by telling them that they were the living embodiments of some historical movement that failed to liberate people either students. This is to contend that if highbrows raised to persuade students that poverty itself is a political, not natural phenomenon. The feesmustfall movement would have diverted their fight in addressing a social question, which is the cause roots of inequality and unequal access to the universities. This was to generate 21st century first South Africa students’ uprising instead of sending them to their doom.

Thus, the role of Feesmustfall was no longer to liberate students from oppression by the state or Universities, but to liberate the life process of society from the shackles of poverty that is why went further to the issue of workers outsourcing. The factual reality is that feesmustfall movement understood the issue of abolishing outsourcing as university issue not societal and fee increment as the red-tapes that block them to accessing liberal universities, not as a subject of inequality. This rendered the movement baseless and was doomed from the start.

The matter of fact is that Feesmustfall yielded nothing. The reason for failure is that the fees are still very present in South Africa’s universities. The reason feesmustfall was doomed from the start is that they posed was not social but political, it concerned not the order of society and private sector but the form of universities structure.

Nonetheless, the issue of abolishing tuition fees, or free education, is political and social matter. This is to argue that social issue and political issue interrelating. Actually, it is more an emancipatory vision or an ideology matter. The issue of complete abolishing of university tuition fees depends in some ways, on the envisage of society we desire to create; one that is based on the de-colonized model of Pan-Africanism such as China developed under Confucianism, or that is based on the US model of liberal capitalist order, or, imitating the German, that is a more social democratic model based on equality.

Following the common argument by economists, many economists succinctly argued that inequality was an inevitable part of economic development. This argument confluent with our argument that in the capitalist society, developing states economic growth embryonically leads to increasing levels of inequality. This is to say, the movement failed to understand that unequal access of university also caused by inequality. Noting that South Africa is one of an unequal society between the gap the rich and the poor whereas Keeton (2014) contended that Rich people are able to save more compared to the poor, however, inequality aid the process of capital accumulation in poor countries like South Africa.

Such inequality results in differences of opportunity which is morally reprehensible. Also by preventing the academic deserving students either best talent from revealing their true potential, the social and economic development are retarded. A further reason why Feesmustfall movement supposed to have waged war against the inequality is because the inequality is bad especially when is simply identifiable along the racial lines as in heterogeneous country for instance South Africa whereby poor and unemployed are likely to be Africans. The question I pose to ask the movement was, why fighting for free education? While knowing that after graduating you will be unemployed, because 5.2% of unemployment is the university graduates. This is to argue that inequality and South Africa’s political failure is the cause of all problems.

The reality is that feesmust fall movement must acknowledge that South Africa’s macro-economic strategy of neo-liberalism policy such as National Development Plan [NDP] which is problematic and not progressive in resolving poverty and inequality. It would be different if the movement understood that South Africa is under contagion mechanisms that connected our country to other states such U.S. I ascertain that if we were a socialist state, which had no polluted apparatuses that joined us to the other countries and institutions, and we were not functionally integrated into the global political economy such as North Korea. In such polity, the feesmustfall movement could have declared in 2015 free education for everyone.

The feesmustfall movement must-go-back-to the drawing board and consider the issue of tuition fees as society matter and of more of political—because inequality is a concerned issue here and there is nothing in our current polity that suggest that fees will fall/abolished.

However, accepting that there is no quick and easy solutions for the government to subsidise universities to the extent where complete tuition fees abolished. The government at same time must display willingness to provide free fee universities, noting that South Africa already allocates a high share of resources to education aspects. Here the government need to greatly tax the wealthy and create a law that make a country’s obligation to reveal the unknown owners of the private companies that registered with tax-havens. And also increase tax in those who earn high salaries, here is the empirical evidence revealed by Tax statistics is that in 2010 sole 2.3% of South Africa’s tax payers earn more than R750 000 per annum, and if the average rate of tax for those earning more than R750 000 in 2010 rises to 41% this brings an additional R8, 1billions income tax. Noting if tax rates rises to the average of 46% to an employee earning R750 000 an additional R16 billion could be raised.

The government had recently taken a contradictory path to establish the commission to inquire into the feasibility of complete abolition of tuition fees on the contrary it is the same government that is committed in building a nuclear station which seemed to cost R1 trillion without establishing the commission to inquire into the  feasibility of nuclear station expenditures. The government bail-out of South Africa Airway [SAA] explicitly justified that the government is unwilling to declare free education system and noting that government spent R84.8 billion in social transfer—social grant in 2010. The failure of the Feesmustfall movement to extend their struggle to other areas of society. This shows that there is some sense of restlessness and nostalgic that makes it so hard to believe that the movement will completely abolish tuition fees.

Activists fully participated in the feesmustfall