HomeArticlesWhy the South African Youth Are Not Voting. 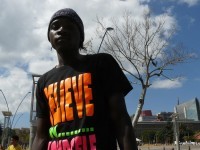 Mainstream political parties do not speak to the needs and struggles of young people. However the much bigger elephant in the room is the depoliticisation of the South African youth since 1994.  As a result millions of young South Africans have taken up artistic, musical and other forms of hobbies to keep busy.

In an astonishing revelation, Independent Electoral Commission said that Millions of young people, particularly those under the age of 20, have not registered to vote in next year’s national general election.

In an interview I conducted with activist and lecturer, Dale McKinley, he said he believes that mainstream political parties have lost touch with young people. McKinley attributed this to the 1994 general election that saw a new dispensation come into power and depoliticised young people across the spectrum.

“It’s not surprising that the political attitude of the youth from the age of 18 to mid 20’s has generally became apolitical and very cynical about established political parties. This is a global phenomenal and when it comes to the South African context the youth has not found much in the messages that the main political parties (such as the Democratic Alliance and the African National Congress) bring across.”

“Political parties have taken up macro policies that have hugely put the youth at a disadvantaged position.  As a consequences of this the country’s youth unemployment level has reached crisis standards and access to higher education is minimal. A lot of the youth are in survival mode and no political party has any concrete policies to change this. To further make things difficult the messages that they try to put across does not really reach young people, because most of young people’s time is taken up by social media and political parties have shown little interest of putting their messages on these platforms. “said McKinley

Meanwhile, a press statement research by Consumer Insights Company Pondering Panda says that four out of five young South Africans do not trust politicians and disregard the elections. According to the survey, younger people felt a politician’s record was more important than what they were saying now. 54% of respondents said that what politicians had done in the past mattered more than what they were saying today, compared to 32% who believed that politicians’ views right now were more important. Responses to this question were also consistent across demographic groups.

IEC has said that it has launched its drive to attract young people to vote in the hope that they would turn up in the much-anticipated elections in 2014. However, it also revealed that the greatest registration gap was in the age categories of 18 to 19 and 20 to 29. The current registrations stood at 8.4% and 49.4% respectively. Sparking an ongoing debate on how can political parties increase young people’s interest in politics and elections. In a press statement the IEC chairwomen Pansy Tlakula urged young people, especially those who would be voting for the first time, to register. She said the youth belonged to a special generation – the first to be born in a democratic country.

“Democracy and freedom came at a great price and cannot be taken for granted. We should therefore treasure and use the opportunity to exercise this right,” said Tlakula